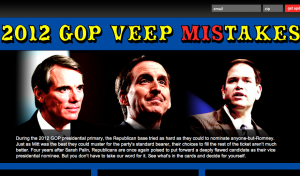 The words “vice presidential candidate” immediately spur an abundance of political chatter as of late, given that’s it’s the last missing piece of the puzzle before the home stretch of campaigning. (A fact the Drudge Report looks to be having fun with.) And now it looks like Democrats are getting a head start with the attacks. The super PAC, American Bridge, dumped lengthy documents of opposition research targeting three names that have been regulars in the media “veepstakes.”

The website, www.veepmistakes.com, published information about Sen. Marco Rubio, Sen. Rob Portman and Gov. Tim Pawlenty. The reports are lengthy — over 400 pages on each politician — and each prefaced with a blurb about just how terrible the respective politicians would be for the country.

Let’s start with Rubio. His report focuses on his Tea Party-assisted rise and “ethical shortcomings” during his time in Florida’s state legislature. Once “Rubio is revealed to be neither the Tea Party champion or draw for Hispanic voters that Romney is counting on, what’s left is an inexperienced freshman Senator who brings little to the ticket.”

About Portman, the PAC says picking him is “just about the worst thing Romney could do” — given Portman’s past as President George W. Bush’s Director of the Office of Management and Budget. Picking him “would be further proof that a Romney administration would just be a more extreme conservative revival of George W. Bush’s policies.”

And finally, T-Paw. His problems, the PAC says, are predicated around his record as Minnesota’s governor, “when the state’s unemployment rate almost doubled, poverty increased, and the homeownership rate declined.” His “one saving grace” may be “a chance for him to clarify his ‘Obamneycare’ attacks during the VP debate.”

The site also deliberately makes references to 2008’s vice presidential candidate, Sarah Palin — essentially using her flaws as a frame of reference. Four years after Palin, it says, “Republicans are once again poised to put forward a deeply flawed candidate.”