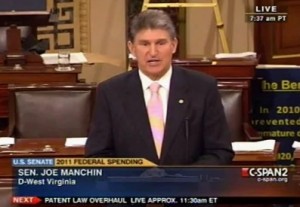 Joe Manchin is the Democratic junior senator from West Virginia who got a lot of attention for his somewhat notorious “Dead Aim” campaign ad that featured his shooting of a piece of paper that had “Cap and Trade Bill” printed on it. It wasn’t so much the gun shooting that raised a nation’s eyebrows, it was Manchin’s rhetoric that appeared to counter President Obama‘s positions, specifically with regards to what he called “the bad parts of ObamaCare.” Well Manchin appears to be going after Obama again, though this time its on the Senate floor.

In the following clip, Manchin calls out what he calls the “political theater” surrounding the current budget debate, before asking “why the Senate is voting on partisan proposals that we know will fail” before calling out what he deems Obama’s lack of leadership on balancing the federal budget for the coming year. The tone of the language is not particularly harsh on its own, but when one considers that the source is a fellow member of the Democratic party, one wonders just how this will play out for Manchin in the end.

Cynics are sure to see this as a fairly naked and calculated appeal to his constituents back home, but its unlikely that this will play well with Democratic leadership inside the beltway (which, in turn, is likely only to further Manchin’s standing back home in West Virginia.) The other oddity worth noting in this clip is Manchin’s own ostensible dereliction of duty as an elected representative of his state. No where does it say that Manchin needs to wait for Obama to present a proposal that is most appealing to both sides of the aisle.

If balancing a budget such an easy proposition, then that would likely have been accomplished long ago. As anyone familiar with playing chess knows, sometimes the best move is to make is the least consequential, forcing the opponent to take an offensive position (and revealing a defenseless flank.) In this case, Manchin appears to be abstaining from making a chess move entirely, choosing instead to point a finger at someone playing the game.

Watch the clip embedded below, courtesy of CSPAN.