Democratic Senator Joe Manchin Says He May Not Vote For Obama

Democratic Senator Joe Manchin Says He May Not Vote For Obama 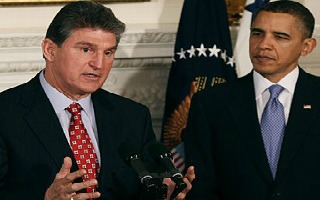 Sen. Joe Manchin (D-WV), who won a special election in 2010 to serve the remainder of the late Sen. Robert Byrd’s term and is up for reelection this year, says that he is considering voting for the presumptive Republican nominee in November and not President Obama.

National Journal reported on Thursday that Manchin, a centrist Democrat “who has done more than any other Democrat up for reelection this year to distance himself from President Obama” is weighing his options.

“The people in West Virginia, they basically look at the candidates—whatever you’re running for, whether it be the president itself, or whatever—[they look at] the performance and the result that’s been attained,” Manchin said when asked how he will vote. “Right now in West Virginia, these first three and a half years haven’t been that good to West Virginia. So, then you look [at] what the options will be, who will be on the other end.”

While the Mountain State has an earned reputation for being deeply pro-Republican on the presidential level and quixotically blue on the local and state level, this condition is relatively recent. In 2000, when the state voted Republican for the first time in decades (West Virginia flipped in the 49-state landslide elections of 1984 and 1972, but was reliably Democratic for much of the state’s history), it came as a surprise to George W. Bush’s campaign staff.

Manchin, who served nearly two full terms as West Virginia’s governor before becoming the state’s junior senator, is in relatively good shape heading into the election year. He faces businessman and likely GOP nominee John Raese, who Manchin defeated comfortably in 2010. Raese ignited his own controversy this week when he compared a ban on cigarette smoking to the Holocaust.