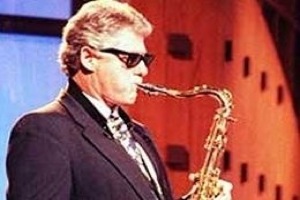 So far, finding someone who thinks anyone other than BP CEO Tony Hayward— besides a minority on the left and right blaming the pro-drilling Republicans and President Barack Obama, respectively– should get the lion’s share of the blame for the BP oil disaster has proven a challenge. Except now, in today’s New York Post, Fox News analyst Dick Morris and wife Eileen McGann argue that the answer is none of the above: it’s Bill Clinton.

In an article titled “The Blame Goes Back to Bubba,” the authors argue that it wasn’t that Clinton was particularly in favor of deep-water drilling, or that he had buddies in the oil industry: Morris and McGann contest that a 1995 law called the Outer Continental Shelf Deepwater Royalty Relief Act gave oil companies incentives to drill deep, drill often, and drill with impunity. The law, according to the pair, “exempted oil wells drilled deep in the Gulf from the normal royalty payments to the government,” spurring companies to drill more and more barrels offshore as time went by. In the first eight years of the law, offshore production increased astronomically, they argued.

None of this would matter, of course, if appropriate safety measures were set in place so that the possibility of a major malfunction were reduced enough to justify the drilling. Morris and McGann say it wasn’t:

“In contrast to the licensing of nuclear power plants, which we require to spend vast amounts of time and money to develop failsafe systems, very little thought was given (obviously) to how to stop an explosion that would trigger a vast spill, how to plug the hole or how to stop the oil from reaching Gulf and Atlantic coast beaches. Instead, the industry took its cue from Washington and went full speed ahead into drilling and production in deepwater wells.”

The authors end up toning the piece down considerably towards the end, giving the verdict that “all three administrations — Clinton, Bush, and Obama — bear the blame for this abject failure.” They also stand by Clinton’s decision to go through with “vast Gulf oil drilling” despite the massive failure of the experiment, and criticize only the decision not to research safety issues further. But blaming the government for not doing something that is ultimately the responsibility of the corporation doing the drilling, especially from vocal critics of big government, come off a little hollow, and comparing the lack of safety to the extreme care used with nuclear power ignores a major precedent set in the development of nuclear technology– by Chernobyl. The disaster may have been preventable, but the energy industry has a record of shirking off all safety responsibility until a major environmental tragedy occurs, and that’s an institutional flaw within the energy industry, not within the federal government.