Did Chris Matthews Just Get Religion On The Tea Party Movement? 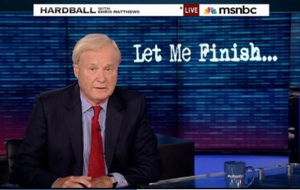 Christine O’Donnell‘s stunning primary election continues to turn the world upside. Not only has it brought about some fascinating dissension amongst the notoriously disciplined GOP ranks, but it also seems to have led MSNBC’s Chris Matthews to a rather stunning epiphany about the Tea Party movement. On tonight’s Hardball, Matthews said “I have waited all my life for voters to have the fire to reach up and burn those, but I didn’t know it would come from the right and center.”

Next up: dogs and cats, living together! A full and rough transcript of the Matthew’s comment follows the video (via MSNBC) (H/T Breibart.tv)

Let me finish tonight with a question. Just where do you think this explosion of voter anger we saw last night in Delaware and have seen growing in voters in Pennsylvania, Florida, Utah, Nevada, Kentucky, color ado is going to take us. I heard progressive glee that the anger was on the verge of burning itself out, that the victory of O’Donnell was like that of Sharron Angle in Nevada throwing away the election. How could those in the general election vote one of these candidates the angry primary voters have kicked pup?

I had my eyes on something different. while other people saw dead people who defeated Mike Castle, I saw the strength of the flames that consumed him and will consume other this rapidly approaching election night. I have waited all my life for voters to have the fire to reach up and burn those, but I didn’t know it would come from the right and center. 2010 could be the first time when being in office In Washington is the worst possible credential when facing voters. O don’t know how far the fire will burn but I think it has a long way to go. It could topple

facing voters. i don’t know haufr the fire will burn but i think it has a long way to go. it could topple the house and the u.s. senate. can could bring the defeat of people who even know don’t feel endangered and could produce an election night spectacle of name brand politicians standing up and saying their careers are cap put. why is this happening? because this system is failing to produce the security and opportunity people have come to expect in this country. in this middle-class country, people are scared and they are getting angry and sense a rot at the top. if the plan of those in power plan to run nasty ads saying you can’t run for this person, i expect the voter will say, are you telling me i have no choice but to vote for you? are you saying that i, this little voter dare not take a chance on someone who has not yet let me down as you have? if that is what you’re telling me, that i have no choice, well, mr. big stuff, you just have to stay up late election night and see what I have done.