Did the RNC Attack Elena Kagan for Criticizing Slavery? 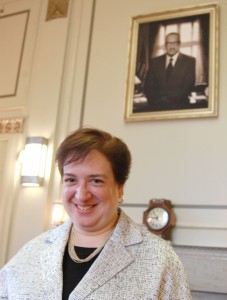 All morning the country has waited with baited breath to see how conservatives would be framing their assault on Elena Kagan. A few hours ago, the Republican National Committee sent out their first memo to reporters discussing Obama’s nomination and in it they seem to have a money quote from Kagan as they point out that she supported the statement that the Constitution, as originally conceived, was “defective”. What they purposefully don’t mention is that Kagan quoted the statement in a tribute to its original speaker, her old mentor Thurgood Marshall. What they also don’t mention is that the statement was attacking slavery. Was the use of this quote a blunder by the RNC or a brilliant political move?

In our current political climate, attacking someone as being against the Constitution is as deadly and vague attack as the use of the ubiquitous uses of the terms “socialist” and “racist” and the memo doesn’t beat around the bush at all, asking its readers if Kagan “Still View[s] Constitution ‘As Originally Drafted And Conceived’ As ‘Defective’?”

Here’s a quote from the memo:

“The President has stated repeatedly that he wants a justice who will understand the effects of decisions on the lives of everyday Americans. But what Americans want is a justice who will stay true to the Constitution and defend the rights of all Americans, adhering to the rule of law instead of legislating from the bench. Given Kagan’s opposition to allowing military recruiters access to her law school’s campus, her endorsement of the liberal agenda and her support for statements suggesting that the Constitution “as originally drafted and conceived, was ‘defective,'” you can expect Senate Republicans to respectfully raise serious and tough questions to ensure the American people can thoroughly and thoughtfully examine Kagan’s qualifications and legal philosophy before she is confirmed to a lifetime appointment.”

It’s an odd quote to hinge an attack on since it can quickly be defended by the left with a mere wave of a hand and the fact that it’s “about racism”. Sure enough, within an hour, the liberal blogosphere was a buzz with posts featuring headlines like “GOP attacks Kagan by defending slavery. Seriously.”

So why would the RNC choose this quote? They’ve had months to plan an attack for every one of Obama’s potential picks and Kagan wasn’t a real surprise to anyone. There are two possible ideas. The first is that the memo was poorly thought through and the quote will vanish from future attacks during the confirmation progress. More likely though, the RNC is displaying a pretty clever knowledge of the way the internet rumor mill works.

A few weeks ago, we wrote about a report which pointed out how frequently older conservatives forward political rumors. It’s become so prevalent that the great myth-busting site Snopes has been forced to downplay their original job of seeking the origins to urban legends about hook-handed serial killers and focus almost entirely on emails featuring the Obamas in pimp outfits. This quote, with its prominence in the memo and lack of a proper attribution, is perfect gristle for these forwarded email chains. All it needs is to be picked up by one blog and, soon enough, your grandmother will be sending you a frantic message with “a quote” from Obama’s anti-Constitution SCOTUS nominee.

The RNC has made some mistakes recently but this memo might not be one of them.