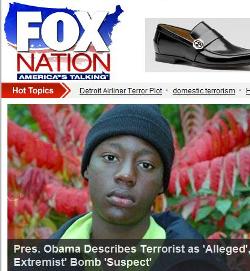 It’s been a while since we reported from Fox Nation, Fox News’ opinion/community website, and there’s a reason for that. The tone seems to have changed – less screaming headlines, less purposely misleading prompts to feed the hungry conservative commenters. But we had to highlight the hypocrisy there today – relating to the use of the term “suspect.”

One of the articles in the top section is headlined, “Pres. Obama Describes Terrorist as ‘Alleged’, Extremist’ Bomb ‘Suspect’.” The story links to a YouTube video (below) of Pres. Obama’s first statements about Flight 253, and to a blog post on GatewayPundit. Apparently things are a little slow this week at the Nation – Obama’s follow-up remarks yesterday were far more pointed. But the crux of the post was to highlight Pres. Obama referring to Umar Abdul Farouk Adbulmutallab as a “suspect.” This is apparently some negative code, according to the right.

But then there’s the story on Fox Nation directly below this one – headlined, “What? Nigerian Suspect Given Lawyers, Civilian Trial, Constitutional Rights“:

The link here includes links to several stories, including one from the conservative Free Republic that all describe Adbulmutallab as a suspect – just like Pres. Obama. I mean, what else do you really want to call him? It’s not a political statement by the right or the left, it’s just where the story is in the justice process right now.

Of course, on the original post, the commenters were OUTRAGED by the President’s use of the term. “Libertarian” wasn’t surprised:

What else would you except from a bleeding heart liberal. He doesn`t want to hurt anyone`s feelings.
Lib-tards want everyone to hold hands and sing Kumbaya. That will fix everything.

And “Whittierblvd” has lowered his expectations about this “fill in the blank” in the White House:

“Extreme bomb suspect” well hells bells what more can we expect from a Muslim loving(fill in the blank)!! ?? One would think the “Muslms” would be up in arms over things like this ?! Nope, you can hear the crickets !! They are all in cahoots with each other ! Profile them, then run them out of this country !!

The site should be praised because it has avoided this type of rhetoric during the last two months (while we’ve documented their past practices here). But this is a step in the wrong (well, far right) direction.

Here’s the video Fox Nation is linking to: