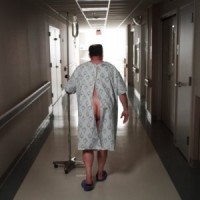 Maybe Maureen Dowd should take over national security (hey, apparently the people in charge have not been doing all that much!). According to today’s column MoDo practically predicted that there would be a terrorist attack over the holiday.

I was walking through a deserted downtown on Christmas Eve with a friend, past the lonely, gray Treasury Building, past the snowy White House with no president inside.

“I hope the terrorists don’t think this is a good time to attack,” I said, looking protectively at the White House, which always looks smaller and more vulnerable and beautiful than you expect, no matter how often you see it up close.

I thought our guard might be down because of the holiday; now I realize our guard is down every day.

Apparently, on top of revealing that airport security is a delusion Umar Farouk Abdulmutallab has also revealed one topic both sides can agree on: The government has dropped the ball (flaccid appears to be everyone’s new favorite adjective).

W.’s favorite word was “resolute,” but despite gazillions spent and Cheney’s bluster, our efforts to shield ourselves seemed flaccid….Citing the attempt of the Nigerian’s father to warn U.S. authorities six months ago, the president intoned: “It now appears that weeks ago this information was passed to a component of our intelligence community but was not effectively distributed so as to get the suspect’s name on a no-fly list.” In his detached way, Spock was letting us know that our besieged starship was not speeding into a safer new future, and that we still have to be scared.

Heck of a job, Barry.

Snap! Also MoDo’s predicts in the not to distant future travelers will “have to come to the airport in hospital gowns, flapping open in the back.” And with that a Happy MoDo New Year.