Dispatches From The New Yorker Festival

Dispatches From The New Yorker Festival

This past weekend, Mediaite contributor Jasmine Moy took in events at the New Yorker Festival, one of the city’s hottest cultural tickets every fall, usually featuring very smart people sitting in chairs on stage, talking thoughtfully about smart things, for longer than five minutes and without interruption. Why is there so little of that on the telly? It even had its share of naughtiness: “They were small breasts, in keeping with the understated nature of the magazine.” If you want to find out the context for that remark, you’ll have to read on. Moy gives a thorough recap below, with photos, so its almost like you were there. You can also persue the New Yorker’s coverage here, video clips here, and, if you’re not a cheapskate, the whole shebang on demand for $59.95 here. -RS 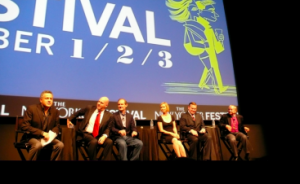 This being the New Yorker Festival, the panel was heavily attended by folks Sarah Palin might call “east coast liberal elites.” A poll by a show of hands proved the audience to be filled with those who are for marriage equality. The panel attendees were also for marriage equality in equal proportions. In attendance were: David Boies who, with Ted Olson, challenged California’s Prop 8; Clarke Cooper, executive director of the Log Cabin Republicans; Cynthia Nixon, the actress, a lesbian, who has been lobbying politicians on GLBT matters; Bishop Gene Robinson,the first openly gay Episcopal bishop; and representing the lonely anti-marriage equality stance, Brian Brown, president of the National Organization for Marriage (NOM).

Brown, clearly outnumbered, was blustery. He repeated several times that the relationship between a man and a woman was “special,” for both reproductive purposes and to create unity. When confronted with the idea of couples who were infertile, he seemed to say that having the right body parts was what counted which seems a bit like giving them an A for effort. He mentioned the standard issue defense that allowing marriage equality would redefine marriage. Nixon, personally affronted, tugged heartstrings throughout the discussion, “I want to say to the gentleman to my left, that gay people who want to marry have no desire to redefine marriage in any way. When women got the right to vote, they did not redefine voting. When African Americans got the right to sit at a lunch counter alongside white people, they did not redefine eating out,” she said to great applause. Later, she came very close to asking Brown whether his family was somehow better than the one she has with her partner and their children. “We are asking for responsibilities, that is what marriage is,” she said.

“People who believe marriage is between a man and a woman are portrayed as bigots,” Brown said, and went on to claim that if marriage equality were allowed, churches would lose their tax exempt status, as organizations do who discriminate on the basis of gender or race. In short, Brown was being victimized. Bishop Robinson was incredulous, “That you’re portraying yourself as a victim is mind-boggling to me,” and went on to point out that Brown, a straight white male, is the last person who can honestly be claiming discrimination. “That you’re reaching so far as to talk about tax status shows me that you have very little to rest on here,” Boies said. Boies stressed the generational divide on this issue, how the youth don’t see homosexuality as those of the 50-and-over set do, “My grandson, who sometimes came to the court during oral arguments, couldn’t understand what this was about! Why anyone would try to keep a gay couple from getting married!” Brown and Boies sparred a bit as Brown made several attempts to prove knew more about the Prop 8 case and Judge Walker’s opinion than Boies did himself. Needless to say, they didn’t fly.

Brown’s last argument was based on the referendums barring marriage equality that have passed all over the country. “Fundamental rights aren’t up to a majority vote,” Boies responded. Cooper, addressing the Republican agenda, said, “Republicans wouldn’t respond well to someone outside the party telling them how they need to change. I consider it my job to try to force acceptance of this issue from the inside.” He said, interestingly, that the main view from within the confines of the U.S. Senate is that being gay isn’t a choice and that he sees easy passage for bills such as the Employment Non-Discrimination Act.

The heart of the conflict is based on the parts of Church and State that aren’t completely separated. That the marriage process involves clergy that are agents of the state means that separation needs to occur more clearly from the outset. Bishop Robinson highlighted the difference between entering and exiting a marriage, “Couples don’t go back to the little church where they got married to get a divorce.”

However, Bishop Robinson sees the tides turning, “What’s happening in the Anglican church is like what happens in a family. A son says, ‘Mom, dad, I’m gay.’ The family is thrown into chaos, asking how expansive can its love be? This is a live issue in every corner of the Church. I think the greatest mistake is walking away from the table.”

When asked in the Q&A afterwards whether the Prop 8 case would have the votes if before the Supreme Court, Boies said there’s a good chance it won’t end up there at all, which prompted a, “But I need another book subject!” from Toobin. Boies joked that he would get his justices from Bush v. Gore (where he argued for Gore), and Olson (who argued the case for Bush) would get his justices and that they would secure a unanimous decision. This elite liberal audience seemed pleased at the thought of such an outcome.