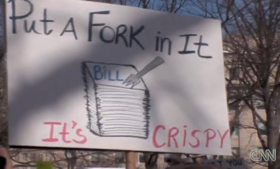 CNN tried to bring some levity to the health care debate yesterday with their coverage of the Tea Party march on Washington attended by representatives Louie Gohmert and Michele Bachmann— and the now-traditional homemade signs that are staples of the movement. The network assigned its comic relief correspondent Jeanne Moos to preside over a montage of clips from the rally and, while the segment was obviously intended to be funny, the jokes flopped, and Moos’ hostile commentary belies CNN’s insistence on objective news coverage.

She begins the segment noting that “a bunch of homicidal protesters” stormed Washington yesterday and delighting in reading off their signs, most of which say preposterous things like “Pelosi spits in America’s face” and “commie pig” (with a picture of Barack Obama, of course). She lazily quips in response to an anti-health care bill chant: “What fun it is to chant about obscure congressional strategy!”

Given the fears of radical Tea Party activists turning to violence and their record of bringing weapons to rallies, calling this type of peaceful demonstration “homicidal” invokes a reputation for violence that is neither statistically accurate nor particularly funny. Exclaiming “what fun!” in reaction to a crowd of people that sincerely believes it is fighting for the future of the nation is precisely the kind of flippant attitude no one would tolerate against any other sort of congregation of people. Imagine saying “what fun!” to a crowd of military parents protesting the Iraq War or even a crowd of PETA members protesting McDonald’s; it wouldn’t happen.

It would also be forgivable if CNN weren’t so obsessed as a network with their idealized version of objectivity.

Watch the clip and decide for yourself below: