Does The BP Oil Spill Mark The Death Of The Tea Party Movement? 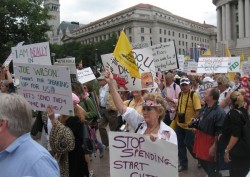 Has all gone silent on the Tea Party front? After months of non-stop Tea Party coverage, and endless speculation that the movement spelled certain doom for both Washington incumbents and possibly the Obama administration, it feels like talk of the Partiers has all but disappeared off the cable newser map.

A quick look at TV Eyes‘ numbers backs this suspicion up. During the month of April, before the oil spill took place, the phrase “tea party” was mentioned nearly 3,000 times on cable television. This past month, as the oil spill has increasingly dominated headlines, that number dropped to 471. That’s a precipitous drop considering how the movement managed to sustain its national headline prominence throughout the preceding months (the numbers are equally high Jan-March) and interesting coincides almost exactly with the BP oil spill gaining national attention.

So why the drop? Has the oil spill yanked the rug out from under the Tea Partiers party? The call for less government intervention into the lives of ‘regular’ citizens that was so prevalent throughout last summer, and fall, and winter has gone nearly silent in the face of the Gulf disaster. In fact, in a rather impressive about-face some of the same voices hollering for the government to get out of their lives are now clamoring for the government to do more. Behold Tea Party darling Michele Bachmann, who was last heard calling President Obama a gangster, now berating him for not being more hands on:

The administration, they were hands off. They didn’t do anything. Where were the boats that could have been commandeered by the government to be sent into this region to deal with that oil plume as it was coming up to the water and destroying marine life? Nowhere to be found. Why? The administration was hands off on this policy.

Sarah Palin, the woman who got out of government so she could help people more, took much the same tone in a recent Facebook note saying “Nearly 40 days in, our President finally addressed the American people’s growing concerns about the Gulf Coast oil spill.” And last night Fox’s John Stossel could be heard supporting government intervention (in this specific case).

Presuming this BP storyline gets worse before it gets better (and considering James Cameron has lately become a go-to person it’s not looking good) one imagines the calls for government intervention and oversight are only going to increase, likely from all corners. A development, one assumes, that will make it rather difficult to run a national anti-government political movement.