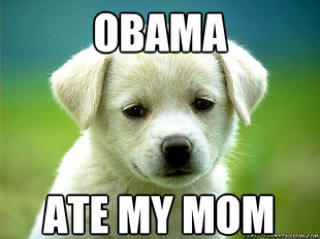 Last week, in part frustrated by what appeared to him a trivial and overblown distraction against Mitt Romney in the form of “Seamus the Dog on the roof of the Romney family car” story, the Daily Caller‘s Jim Treacher found an excerpt in President Barack Obama‘s book, Dreams from My Father, where the President admits that he was fed dog, snake, and grasshopper meat as a child. The finding has launched a tongue-in-cheek counter-attack to the Seamus story– and, now, a mysterious interest group named “Dogs Against Obama” as released an attack ad replete with adorable-looking pups pleading for their lives with the President.

The mysterious interest group debuted their internet ad, which somehow combines the aesthetic sensibilities of Swift Boat Veterans for Truth and I Can Haz Cheezburger, this afternoon, in which a narrator sounding a bit like the “honey badger” voice informs the audience that the President admits to once “consuming delicious dog meat” and asking poignantly, “Should we have a President that admits to devouring man’s best friend?”

Like all post-Citizens United political action groups (of sort), Dogs Against Obama also has a Tumblr (this isn’t really a result of Citizens United so much as a truism of the 2010s). The Tumblr includes all sorts of photos of adorable puppies begging not to be eaten, please. While the backlash against President Obama for his dog confession has been swift and loud, no word yet on whether ophiophilist voters are organizing a similar “Snakes Against Obama” initiative.