Donald Trump a ‘Worther,’ Proposed One-Time ‘Net Worth Tax’ on the Rich in 1999 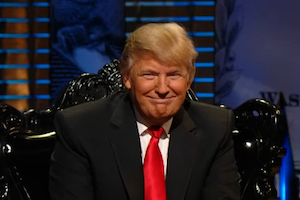 If you thought Mitt Romney had his work cut out for him explaining his individual health insurance mandate, wait ’til you get a load of the policy skeleton that just popped out of Donald Trump‘s (R-$$) closet. The 2012 GOP maybe-hopeful has quickly ascended to towering heights on the strength of constant appeals to the “Birther” crowd, but his 1999 proposal to redistribute the wealth of the richest Americans via a one-time “Net Worth Tax” may invent a new brand of wingnut: the “Worthers.”

That’s right, as a Reform Party presidential hopeful in 1999, Donald Trump made an economic proposal that would make Joe The Plumber snap his plunger like a twig. Trump proposed a one-time tax of 14.24% on those with a net worth exceeding $10 million, which Trump said, at the time, would personally cost him $750 million. From CNN:

Trump, whose own net worth is an estimated 5 billion, says the wealthy would not suffer if his economic plan were enacted.

“Personally this plan would cost me hundreds of millions of dollars, but in all honesty, its worth it,” Trump said.

Trump predicts his debt elimination combined with his tax cuts would trigger a 35 to 40 percent boost in economic activity, with more business startups, more jobs, and more prosperity.

“It is a win win for the American people, an idea no conventional politician would have the guts to put forward,” Trump said.

So, what happened between then and now? The New York Times‘ article on Trump’s plan provides a clue: (emphasis mine)

It also had the advantage of lessening any liability Mr. Trump might believe he could suffer because of his own reputation as a man of wealth. The developer put his own net worth at $5 billion, and said that under his plan, he would owe $750 million in taxes (though his estate would ultimately profit if another part of Mr. Trump’s plan were enacted: the repeal of the estate tax, which can be as high as 55 percent).

You see, folks, there was a time, in this country, when people kind of resented the way the rich stack the deck against everyone else, but through clever use of the catchphrase “class warfare” (which only ever seems to apply in one direction), that’s no longer the case.

According to the Times, Trump’s plan was called “serious wacko stuff” by his rival, and eventual victor, for the Reform Party nomination…Pat Buchanan.

It gets even better, though. It turns out that Trump’s plan is immortalized in the Congressional Record, as Rep. Major Owens (D-NY), a member of the Democratic Socialists of America, lauded the plan on the floor of the House, and read the entirety of the NYT piece about it into the record.

So, perhaps a Trump victory in 2012 wouldn’t be such a bad thing. Once elected, who knows where the shifting political wind will blow him?