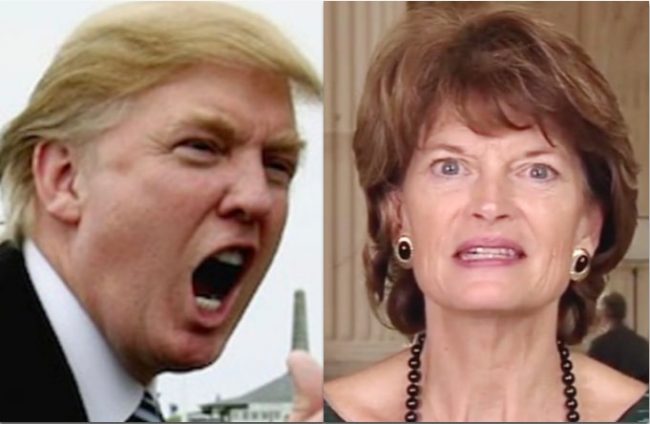 Donald Trump claimed a small victory Tuesday afternoon when the Senate voted for a motion to proceed to debate on the widely unpopular Senate plan to replace Obamacare.

The final tally of 51-50 only came to pass with an assist from Vice-President Mike Pence. The knifes edge vote was caused by GOP defections from Sen. Susan Collins (R-ME) and Sen. Lisa Murkowski (R-AK)

On Wednesday, Trump took out the knife for Murkowski on Twitter, tagging her and saying she had “let the Republicans, and our country down.”

Senator @lisamurkowski of the Great State of Alaska really let the Republicans, and our country, down yesterday. Too bad!

The tweet represented the continuation of an ongoing assault which began yesterday.

During a press conference yesterday with Lebanese Prime Minister Saad Hariri, Trump lambasted both Collins and Murkowski for jumping ship.

“Very sad, I think. Very, very sad — for them,” he told reporters at the White House.

Trump on Murkowski and Collins voting no on motion to proceed: “Very sad, I think. Very, very sad — for them.” pic.twitter.com/7Deiyszzdd

The victory on the procedural vote, was darkened after the bill and several amendments were voted down by Senators by a wide margin. With objections percolating from both the moderate and conservative ends of the GOP Senate caucus, the path to victory on a final bill remains as perilous as ever.

Murkowski is popular in Alaska, even winning an absurdly improbable write-in campaign in 2010, so she is likely to be unswayed by Trumps ire.