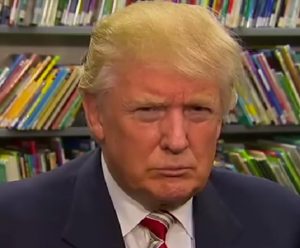 During a town hall event at black church in Cleveland, Donald Trump fielded a question from an audience member asked the republican nominee what he would do to stop “violence in the black communnity.”

His answer, in part? Stop-and-frisk.

“I would do stop-and-frisk,” Trump said. “I think you have to. We did it in New York, it worked incredibly well.”

Trump’s remarks — transcribed above by NBC’s Alexandra Jaffe — were made at the New Spirit Revival Center in Cleveland as part of a town hall to air on tonight’s episode of Hannity. The Hill reports that Fox News is billing tonight’s special as one which will “discuss the core issues and concerns surrounding African-Americans this 2016 election cycle.”

Stop and frisk works. Instead of criticizing @NY_POLICE Chief Ray Kelly, New Yorkers should be thanking him for keeping NY safe.

“Concerned about the ongoing, tragic violence in Chicago, Mr. Trump, along with many other Americans, believes that ‘stop and frisk,’ used successfully in New York City during the administration of Mayor Giuliani, saved lives and reduced crime. Mr. Trump believes that a locally tailored version of ‘stop and frisk’ should be used in Chicago to help reduce the city’s skyrocketing violence and make our Chicago safe again.”