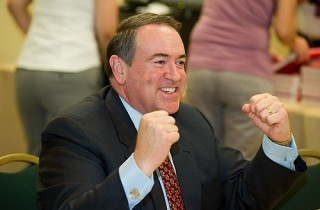 The last time you visited presidential candidate Mike Huckabee‘s web site — which I know you do regularly — did you notice that the endorsement quotes from the Duggar family had mysteriously gone missing?

Were you worried that Huckabee came to his senses about pallin’ around with people who won’t even protect their own daughters from being molested in their own home and separated himself from the scandal-plagued family? Well, rest assured, Huckabee and the Duggars are still totally cool, and he made the media rounds to reiterate his support for them and their support for him. So in case you were wondering, Huckabee is still happily associated with the scandal-plagued Duggar family.

The conspicuous absence of the quotes by Jim Bob and Michelle Duggar was noticed June 1, right smack in the midst of the molestation scandal revelations, and Huckabee explained that this was all part of a planned rotation of quotes from various supporters. It was merely time for the Duggars’ quotes to rotate out to make room for another one. On conservative talker Steve Deace‘s radio show, the GOP candidate said the Duggars would be back on the site in due time. And not to be outdone, he called out the media for not better looking into this matter:

There are probably 200 websites and new sites including TIME and all sorts of legitimate news sources that are printing and blogging that we have distanced ourselves, that I have run from them, that we have decoupled. You know how many called our office to ask if that was true. It’s like zero. Not one called to find out what happened. This is why I tell people, if you read something about me on the internet, don’t be so sure. Wait until you see me in person.

There you have it. Huckabee and the Duggars have not “consciously uncoupled,” nor have they decoupled. They are still coupled in holy political matrimony.