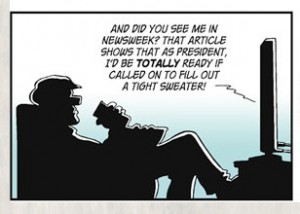 Conservative media watchdog Newsbusters has taken appropriate umbrage at Cartoonist Garry Trudeau‘s latest Sunday Doonesbury strip over its use of a sexist (and, frankly, lazy) joke about Sarah Palin‘s breasts. The strip feature Palin on TV telling an interviewer that her recent Newsweek cover story “shows that as president, I’d be totally ready if called on to fill out a tight sweater.”

No, you haven’t forgotten to laugh.

Perhaps a bit of background is necessary. Doonesbury is a comic strip that appears in a thing called a “newspaper,” which is, as the name suggests, made of paper and has news printed on it. The strip has been around for 41 years now, and in its heyday, was known for its subversive edge (subversive compared to Marmaduke, I suppose). Doonesbury is a mixture of ensemble narrative and liberal doses of political commentary.

The Palin strip actually does contain a few funny lines(once it gets going. The first 2 panels are of a character whistling and making Jiffy Pop), but misses badly with its sexist dismount. Perhaps this was an attempt to regain some edge ever since Dennis the Menace went emo, but it ends up being offensive and unfunny, especially in a strip that’s supposed to appeal to liberals.

In the strip, long-time character B.D. is watching a televised interview with Palin in Iowa. She’s asked, “What do you think of Michele Bachmann’s early success here?”

In the second to last frame, the faux Palin said, “And did you see me in Newsweek? That article shows that as president, I’d be totally ready if called on to fill a tight sweater.”

In the next frame, B.D. thinks to himself, “Good one. Advantage Palin” as her interviewer asked, “Are you saying Bachmann wouldn’t?”

The faux Palin responded, “We don’t know. The lamestreamers won’t get the facts out.”

Many conservatives have no problem with Sarah Palin as affectionate sex object, and while Newsbusters’ Noel Sheppard is rightly offended, he sees this as mainly a partisan issue:

Now imagine for a moment Barack Obama was a Republican, and both Palin and Bachmann were Democrats.

Yes, that was rhetorical.

Well, allow me to respond anyway. While Garry Trudeau might be less likely to target Democrats, there are plenty of media types, left, right, and center, who have no problem making sexist remarks about liberal figures like Hillary Clinton, First Lady Michelle Obama, Janet Napolitano, and so on. It seems the only time conservatives care about sexism is when the media they hate fails to call out sexism against a conservative. Sexism, as any woman will tell you, is not a partisan issue.