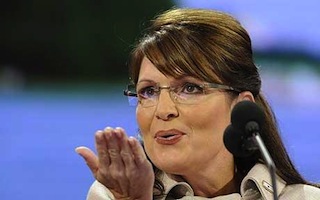 While Sarah Palin has refused to admit that her account of Paul Revere’s famous ride may have been wrong, some Palin fans have taken it upon themselves to make it right. Over the weekend, as the story played out on political talkshows, a mini war was brewing on the battlefields of Wikipedia as people attempted to alter the text on Revere’s Wikipedia page to match Palin’s account while other editors tried to shut them down. George Orwell would be so proud. Or, y’know, horrified.

The Palin editors attempted to add Palin’s quote as well as make mention of a “disputed account” while the opposing side fought to prove that Palin was not a “reliable source.” Thanks to the always entertaining Wikipedia Talk Page for the article, we can see the strikes made by each group. Here’s a sample of the fight:

“In the article on Paul Revere, someone has added false information in an effort to support Sarah Palin’s FALSE claims about Paul Revere.
‘Accounts differ regarding the method of alerting the colonists; the generally accepted position is that the warnings were verbal in nature, although one disputed account suggested that Revere rang bells during his ride.[8][9]’
This must be removed as it is a LIE designed to mislead. dj
Dajames (talk) 14:46, 5 June 2011 (UTC)

A lie? If you follow Wikipedia’s rules, we must maintain a WP:NEUTRAL position, representing the mainstream position as well as disputed versions. I think the addition represents this fairly — the mainstream position is that Revere’s warnings were verbal, but there are differing accounts that the warnings were done with bells — with two sources: WDHD television plus a live interview, with a highly influential US politician relating these facts.–Tomwsulcer (talk) 14:50, 5 June 2011 (UTC)

I kindly remind people that it’s not our job here at Wikipedia to decide what’s true, but to report what reliable sources say, such as the LA Times, WDHD TV in Boston, numerous others. And they quoted an American politician saying that bells were used. –Tomwsulcer (talk) 15:09, 5 June 2011 (UTC)

Tomwsulcer – You should be kindly reminded that it’s not your job to debase Sarah Palin’s wiki page with (http://en.wikipedia.org/wiki/Talk:Sarah_Palin) your version of the occurrence for political reasons. The left leaning bias on Wiki is well known, but these types attacks are over the top. Mk 71.228.77.211 (talk) 20:08, 5 June 2011 (UTC)

It’s not the LA Times that’s questionable as a reliable source, it’s Palin herself. Even if the Times (& others) quoted her accurately, her off-hand, poorly-informed view doesn’t belong here, per WP:UNDUE, and I have reverted. Hertz1888 (talk) 15:30, 5 June 2011 (UTC)

Sarah Palin is a former governor of Alaska as well as a presidential candidate of one of the two national parties in the United States. Her account of Paul Revere’s famous ride has achieved national attention from most mainstream media — LA Times, CNN, you name it. There are numerous reliable sources quoted her exact words on this subject. This article has HUGE attention (55K readers in one day) as a result. Clearly, there should be some mention given its obvious importance. And I remind people, kindly, that it’s not up to us contributors to determine who is and isn’t a ‘poorly informed view’ and to try to determine truth. Rather, Wikipedia is about verifiability.–Tomwsulcer (talk) 15:37, 5 June 2011 (UTC)”

Fittingly, this war had its own Paul Reveres, as online patriots did their best to spread the word of the coming Palin forces. Little Green Footballs wrote that “you’ve gotta almost admire the sheer blind dedication of Sarah Palin’s wingnut acolytes” while a Redditor made the Revere comparison clear with his post “Not that I’m trying to ring any bells at the moment, but Palin’s redcoats are trying to re-write Paul Revere’s Wiki page right now.”

Back on Wikipedia, the editors seem to hope this fight will die down with some suggesting the page be locked against further revisions until the Palin story blows over. However, like the Revolutionary War itself, Wikipedia battles can last for years. It’ll be interesting to see who has the stamina, fortitude, and, I guess, free time to come out victorious in this. Like all Wikipedia battles, history will literally be written by the victors.