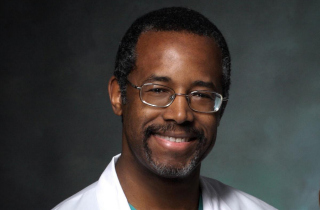 This week’s TIME magazine cover features 2016 GOP frontrunner Marco Rubio with an inescapable headline: “THE REPUBLICAN SAVIOR”. Given Mitt Romney’s stinging defeat in November and the almost-comical party-infighting since, Republicans could use that kind hero right now.

Seemingly out of the same kind of nowhere an Illinois State Senator named Barack Obama emerged from as a keynote speaker at the 2004 Democratic National Convention, Dr. Ben Carson and his anti-PC mantra has tongues wagging on the right—especially in conservative media circles—following his remarks in front of President Obama and the First Lady at the National Prayer Breakfast on Thursday. The non-verbal reaction from the President during Dr. Carson’s candid but respectful speech had not been seen since that infamous first debate with the aforementioned Romney.

I was about to write that Benjamin Solomon Carson’s story deserves its own movie, but that appears to have already happened via 2009’s Gifted Hands: The Ben Carson Story starring Cuba Gooding Jr. and Rod Tidwell. His bio is a remarkable one: Raised by an illiterate single mother who held three jobs to make ends meet in inner-city Detroit, Carson was a self-described “horrible student with a horrible temper.” He even tried to stab someone at age 14. Today, he’s arguably the most renowned person in medicine as Director of Pediatric Neurosurgery at Johns Hopkins, earning that esteemed position at age 33.

During a Friday night appearance on Hannity, the host asked Carson if he would consider a run for president, adding “I would vote for you,” to which Carson replied: “If the Lord grabbed me by the collar and made me do it, I would,” adding, “If I got a nickel from everyone who sent me an email asking me to run, I would be able to finance my campaign.”

As someone who critiques the performance of cable news guests for sport and has played the role more than a few times, I can say without ambiguity that Dr. Carson is as comfortable in his own skin and confident as an unrehearsed speaker as we’ve seen in a long time. It’s that poise, intelligence and sheer gravitas in articulating common-sense conservative positions that has Republicans as excited about the prospects of Dr. Carson as Democrats were with Mr. Obama nine years ago.

To call Carson a sensation would be an understatement. So is this just 15 minutes of fame, or is there something more to it?

Well, for those who doubt Carson’s presidential aspirations, the retort here is a Freudian one: There are no accidents. There’s a REASON he decided to broach topics such as our crippling debt, healthcare woes and the need for tax reform (via a flat tax) with the President sitting just five feet from him. There’s also a reason he chose to appear in the friendly confines of Fox News the following evening to keep the momentum from the Prayer Breakfast going (and don’t bother with the “plug a book to make more money” argument…the guy is already worth millions).

If Dr. Carson were to announce plans to run for higher office, the reaction out of liberal media would be pure (and unintentional) entertainment. As I’ve written recently, the predominant theme in cable news “debate” is not actually solving a problem, finding common ground or objectively enlightening an audience. Instead, the primary objective is publicly neutering what is seen as the opposition…all while calling out the other side’s hypocrisy and stupidity in the most pontificating way possible.

In MSNBC’s world, it’s about feeding a growing audience the red meat it demands on a daily basis:

The party of “no” only opposes the president for personal, nefarious reasons.

They don’t care about the poor and sick.

In Fox’s world, the vitriol is far more subdued outside of the aforementioned Sean Hannity, yet the narrative is more effective in terms of solidifying viewer loyalty. The basic themes are:

Democrats are irresponsible and reckless with the country’s spiraling debt and deficits.

They’re bankrupting major entitlements with no plan to seriously address the issue.

They redistribute wealth/embrace themes of socialism.

They blatantly play the race card to advance a narrative/agenda/spread fear.

That said, it would nothing short of fascinating to watch MSNBC try to Romneyize a renowned figure like Dr. Carson if he decides to make a run at the White House. It will also be fun witnessing Fox News circle the wagons around their newest ratings juggernaut.

Looking back, could there have been a more delicious candidate to come from central casting than Mr. Romney for the folks at 30 Rock to demonize?

• CEO of a private-equity firm that thrives off greed, outsourcing American jobs or eliminates them altogether

• Born into money, power, hides money offshore… could care less about 47 percent of the country

• Advocate of racist dog whistles via words like “golf”, “Chicago” and “angry” to energize zombie base

But what could be done to transform Dr. Carson into the same cartoon?

Hmmm…can’t call him a racist. And going the Clarence Thomas route will be a dangerous balancing act, as Melissa Harris-Perry learned recently.

Went from the bottom of his class in one of the country’s poorest neighborhoods to a leading surgeon in the world (all while performing operations on over 300 kids with cancer per year), so the silver-spoon, can’t relate to the average guy/only out for himself/greedy argument is out…

Seriously, in terms of achieving the make-the-political-enemy-look-bad narrative, what would left-leaning media do in a Hillary-Carson Presidential matchup?

Producer #1: “Well, he DID use a Bible analogy when outlining his support for a flat tax.”

Producer #2: “Yeah, and he does drop “Lord” into the conversation more than Ray Lewis!”

To that end, the smart money is on the “religious nut” angle being broached. But if that fails, and from what we know about him now, the 62-year-old, married, cerebral, likable, prostate cancer survivor is the definition of unattackable.

Of course, Dr. Carson’s perspectives on big issues of the day (taxes, debt/deficits, healthcare, and social issues that played a big role in this election) are relatively unspecific at this point. Remember, Sarah Palin’s national debut was also flawless. Then again, she wasn’t the first doctor to successfully separate a pair of Siamese twins.

Of course, the political calendar says we may be getting ahead ourselves (in addition to locking up the Hannity vote, the Wall Street Journal already has an editorial out titled “Ben Carson for President”). There’s still 44 months to Election Day, and Hillary, Rubio, Ryan, Christie, and Biden all haven’t even declared their intentions yet.

The Republican Party is in the market for a savior.

That knight may be Marco Rubio.

However, if the last four days and the hubbub on the right and its media are any indication, the job is Dr. Carson’s for the taking.