Eight Ferraris, Three Mercedes, And A Lamborghini All Destroyed In World’s Most Expensive Car Accident
video

Eight Ferraris, Three Mercedes, And A Lamborghini All Destroyed In World’s Most Expensive Car Accident 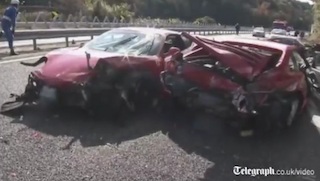 Yikes. This video hurts just looking at it.

You know when you park in a parking lot and you swing open a car door and almost hit a really, really nice car and you think to yourself, “Man, I really do not want to hurt that car”? Ok, now imagine a giant, multi-car pile up involving nothing but that kind of car. That’s what happened in Japan.

The accident occurred on the Chugoku Expressway in the southern part of the country. Somehow the situation seems to only have involved fans of expensive, foreign power cars who all got in an accident at the same time. It’s amazing to think how that could have happened. Maybe a man who was confident in his penis size drove by on the other side of the highway and all these drivers got distracted due to their intense jealousy. Who knows?

Fortunately, no one was hurt seriously. From the Telegraph:

“Miraculously, none of drivers – the majority of whom are reported to be foreign car enthusiasts – were seriously hurt in the wreckage but the bill is still bound to be painful nonetheless.

Such was the severity of the damage, several of the luxury cars have been written off, leaving their owners with the nightmare scenario of seeing their prized possessions turned into expensive scrap metal.

Ouch. Just to help out, let me remind people that a million pounds equals about 1.5 million dollars.

The Telegraph article also includes some Japanese television footage of the aftermath. I warn you, if you have any car fans or, uh, money fans in the family, I’d get them out of the room before you hit play. There’s no telling how the below video will affect them.