Politics: The New National Pastime That Could Save Journalism

Politics: The New National Pastime That Could Save Journalism 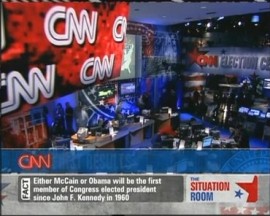 The other day Murray Chass, the former NYT sports reporter, penned a much picked-up piece about how the considerably small number of newspapers who had sent reporters to cover the World Series was a “startling barometer of how critical the health of the newspaper industry is in this country.” Yes, the newspaper industry, as we are all far too familiar, is in critical health. And maybe people are less interested in baseball, for whatever reason ($10 hot chocolate at Yankee Stadium may have something to do with that). Or maybe the country has just discovered a new national pastime. Namely, politics.

Before it became clear that Mayor Bloomberg was thisclose to losing the NYC mayoral race (thus making yesterday’s election actually compelling), I opined in our liveblog that I was not sold on “any of these races being huge, or any more significant than they have been in past years. I think we’re all just election junkies.” And the coverage of last night would appear to prove me out. Check out this rundown of cable coverage as listed on Mike Allen’s Playbook (3/4 of the way down). This for a small election that’s not even a midterm and will arguably have next to zero effect on 2012! Apparently the future of journalism is politics. Can anyone remember this level of attention being paid for a handful of local elections? I can remember presidential elections that barely got this level of coverage (Clinton/Dole anyone?).

Anyway, it would seem that despite a lot of wringing of hands at the end of last year’s actually historic election season about what certain media organizations were going to do when they had no election to cover, the answer increasingly appears to be that they will merely find other elections and/or turn everything into a race. Perhaps the real real result of Barack Obama’s record-breaking campaign has been to switch our national pastime.

It occurred to me when I was doing a ‘Year Of Obama’ post yesterday that perhaps the White House had sussed out this national addiction long before anyone else managed to put their finger on it and that was the real reason they turned Fox into some sort of rival, and successfully managed to submerge the news cycle for the last three weeks with a lot of campaign-like coverage. In short the lesson is, if you want a successful career in journalism best to find Politics as quickly as possible. You have a least six months before we start winding up for the midterms.

Related:
Journalism In 2009: The Year Of The Big Easy
Time For Obama To Pitch His Health Care Plan Kanye West-Style