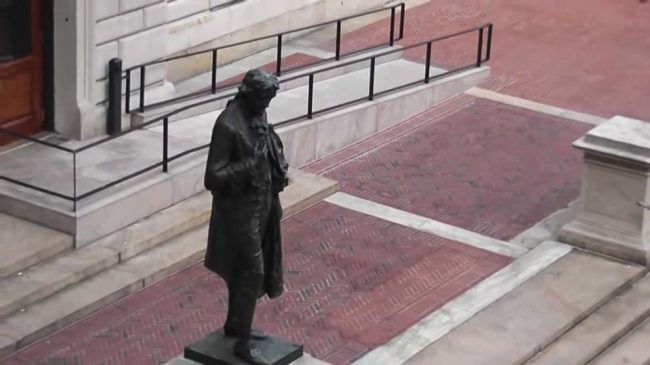 Student activists at Columbia University recently launched a protest of a statue of Thomas Jefferson on their campus, as it supposedly honors “the legacy of a man who is the epitome of white supremacy.”

Campus Reform reported on the efforts of the “Mobilized African Diaspora” (MAD) in a recent article. The statue, which stands outside the Ivy League university’s Graduate School of Journalism, was erected in 1914 as a gift from the estate of publisher Joseph Pulitzer. Columbia actually gave the sculpture a facelift in 2014 to celebrate its 100th birthday.

The activists, who are now targeting the Jefferson statue three years later, claimed in an April 16, 2017 statement that their school “adheres to Jefferson’s brand of hypocrisy because it keeps a physical manifestation of the antithesis to Black women’s lives on the same campus that uses illusions of diversity to recruit students.” They added that this “makes it clear that Black students are merely tokens of the university.”

MAD revealed that they had placed a Klansman’s hood over the statue as “a direct representation of the ideals he believed in, we are contextualizing his racist and sexist legacy,” adding that “only when Jefferson’s face is hidden in this manner can the sinister reality of his actions and legacy be realized.”

The students then complained that Columbia “removed the [hood] display after half an hour, thus continuing its tradition of silencing Black voices.”

MAD’s statement later contended that “venerating Thomas [Jefferson] validates rape, sexual violence, and racism on this campus.” They also attacked the Columbia administration for an apparent failure to “provide the safe and inclusive environment that is promised in the university’s official diversity statement.”

The student group concluded by underlining that “by commemorating the legacy of a man who dismissed the humanity of all Black people, Columbia continues to position itself as an anti-Black institution that upholds hypocrisy and white supremacy.” They promised that they would continue “demanding that Columbia reconstruct itself and address its anti-Blackness every step of the way.”

It should be pointed out that MAD didn’t explicitly call for the removal of the statue, but say it “legitimizes the exploitation, neglect, and erasure Black people continue to suffer.”