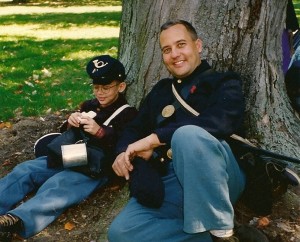 Barely two days after Bill Maher and The Atlantic‘s Joshua Green outed him as a Nazi re-enactor, Congressional candidate Rich Iott (R-Ohio 9) is apparently unfit to re-enact a bad 80s movie. Iott has been dropped from the GOP’s ‘Young Guns’ website, and head Young Gun Eric Cantor has repudiated him. While Iott’s participation in the group was undeniably bad politics, does he really deserve to be thrown under dem bus?

You could argue that, politically speaking, Iott deserves whatever he gets. Despite what some apologists say, this is not simply about “military history.” If you’re going to have World War II reenactments (or movies), someone has to play the Nazis. His opponent, incumbent Rep. Marcy Kaptur (D-Ohio), points out the real problem (via a spokesman):

“Wiking members say they re-enact ‘to honor’ the Waffen SS soldiers. But honestly, who would honor such butchers? They fail to mention that the entire SS organization was declared a criminal organization by the Nuremberg war crimes tribunal.

“Wiking members say they ‘salute their (Waffen SS) courage and loyalty to put their lives on the line in defense of their native soil…’ It’s time for a fact check: the Waffen SS fought mainly on foreign soil, not native soil, and they committed atrocities against civilians throughout Europe and against American soldiers in Belgium.

“To perpetuate such a twisted and dangerous view of history is outrageous and indefensible.”

Indeed, the Wiking reenactor’s website makes no mention of the specific war crimes committed by that division, an omission that they might think is covered by this disclaimer:

Disclaimer: This page or anyone involved in its creation, or members of reenactment groups listed here, are in no way affiliated with real, radical political organizations (i.e., KKK, Aryan Nation, American Nazi Party, etc.) and do not embrace the philosophies and actions of the original NSDAP (Nazi party), and wholeheartedly condemn the atrocities which made them infamous. May the victims of this unspeakable horror rest in peace. As we portray the German combat soldier, we are only interested in recreating his daily life, furthering our understanding of what it took to be a soldier, and at the same time having fun reliving history. We honor the men (and women) who really experienced the war, and we salute their courage and loyalty to put their lives on the line in defense of their native soil, no matter what nationality or government.

Whether you agree that this is possible or not, the intent appears to be to carve out soldiers who did not commit atrocities as the ones they portray. Viewed in that light, Iott’s explanation gains some credibility:

Never, in any of my re-enacting of military history, have I meant any disrespect to anyone who served in our military or anyone who has been affected by the tragedy of war, especially the Jewish Community.  I have immense respect for veterans who served our country valiantly, particularly those who fought to rid the world of tyranny and aggression by relegating Nazism to the trash heap of history. I also believe we need to ‘never forget’ what happened to Jews during that war.   In fact, my respect for the militaryand our veterans and my concern for the victims of war is one of the reasons I have actively studied military history throughout my life.

Iott also explains that he is a longtime military re-enactor, and provides photos of instances in which he played the good guys.

On the other hand, the Wiking website, and this recruiting video, clearly bespeak a misguided admiration for the 5th SS Panzer Division’s military prowess:

This admiration is echoed by Iott’s statements to The Atlantic:

I’ve always been fascinated by the fact that here was a relatively small country that from a strictly military point of view accomplished incredible things. I mean, they took over most of Europe and Russia, and it really took the combined effort of the free world to defeat them. From a purely historical military point of view, that’s incredible.

The central issue, then, is not whether it’s okay to “Play Nazi Dress-up,” but whether the “military history” of the 5th SS Panzer Division can be reduced to an abstraction. To any thinking human being, or Star Trek fan, the answer should be an easy “no.” If you’re going to play the Nazis, in a reenactment or a movie, you have to face the fact that you are the villains. Iott’s statement makes no recognition of this.

All of this makes Iott insensitive, wrongheaded, misguided, perhaps even stupid, but it doesn’t make him a Nazi, or a Nazi sympathizer. It’s an important distinction, because that’s the taint that’s being applied to Iott, and in this case, that punishment doesn’t fit his crime. Maybe he deserves to lose his race for Congress, but he doesn’t deserve to live the rest of his life as “that Nazi Republican guy.”