Esquire Writer On Newt Gingrich: ‘It Was The Racism That Threw Me’ 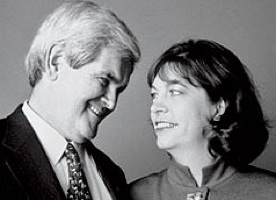 Yesterday Esquire released a rather explosive 8,000 word essay about former Clinton-era Speaker of the House and presumptive GOP Presidentail Candidate Newt Gingrich. The epic expose is sure to make a lot of news, and become an ongoing factor in Gingrich’s political future, because the writer chose a very interesting method of getting to know the candidate: by interviewing his ex-wife Marianne Gingrich. In a follow up blog post, writer John H. Richardson revealed his motivation behind the interview: his racist comments.

In a separate blog post entitled “Why Marianne Gingrich Told Me About a Vulnerable Newt,” Richardson opened:

It was the racism that threw me. As a reporter, I’ve always believed that everyone has some kind of inner coherence. No matter how inexplicable their behavior may be, there is always logic somewhere.

This proved true with a multitude of subjects, from murderers to movie stars. Until Newt Gingrich.

And at least three times, I heard him make the same crack about President Obama’s athletic abilities. First it was with a group of small businessmen: “The more angry we get, the worse it is for Obama. I don’t care how many three-point jump shots he makes.”

Next, he said it to a group of Tea Party leaders: “The national news media is pathetic. They keep talking about his three-point basketball shot and not the 17 percent under-employment. Those are the most expensive basketball shots in history — $1 million a shot.”

Richardson sees these comments as racist in nature, why else would he cite them. And while they may play on racial stereotypes and be racially charged, its a pretty big accusation to claim that they are out and out racism. Richardson explains:

But in front of a large group of Southern conservatives, Gingrich chose to associate the president with athletics. He didn’t mention fried chicken or watermelon, but he didn’t have to. Just before he made the jump-shot crack, one member of the audience called Obama “the Kenyan.” Gingrich said nothing. Another complained about all the shiftless people living on welfare in New Orleans. Gingrich didn’t say anything then, either.

The original 8,000 word essay that is filled with both really great reporting and first-rate writing that makes for an incredibly compelling read. It’s interesting, then, that Richardson posted this “motivation” behind the post on something as personal and ephemeral as perceived racism.

For one can imagine that Gingrich’s defenders (and probably the candidate himself) will cite this very blog post as evidence of a prejudice against him. Isn’t it ironic, dontcha think?