Even the White Supremacists at Stormfront Say Hillary Won the Debate 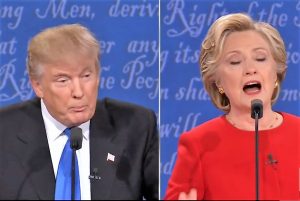 Republican presidential nominee Donald Trump may be having trouble facing the fact that he got pounded like a veal cutlet in Monday night’s first general election presidential debate, but even his die-hard white supremacist fans at racist HQ Stormfront had some surprisingly realistic assessments of Trump’s performance. Thankfully, Ashley Feinberg at Deadspin’s Concourse blog went there so we don’t have to, and gathered up a sampling of what the Trumpists had to say. It wasn’t pretty.

Since being founded by a former Ku Klux Klan leader in 1996, Stormfront has been the internet’s premier destination for white nationalist and neo-Nazi keyboard warriors everywhere. And even they think Hillary Clinton won the debate tonight.

Of course, not everyone on the site is in agreement, but a bizarre number of them (which is to say, more than one) think ol’ Hil-LIE-ry had it in the bag.

Feinberg goes on to display screenshots of wise comments like these:

WhiteNationalist Anti gun is anti white! – And there it is.
Anyone surprised that the Establishment will crow that “he got crushed….”?

Here we go. The Hag won. Trump has no chance. Give up folks. The Beast has won.

European American – Seriously. Anyone with a brain knows for a FACT that what’s happening under the negro in chief right now and what’s been going on for decades means that everything Hillary just said tonight was a total lie and that she won’t ever live up to anything she just promised people. All talk, no action!

The best, though, was this user who got technical about it:

Really, is that what they said at your weekly Debating Society meeting?

As Feinberg pointed out, there were plenty of Stormfronters who thought Trump won, and one thread devoted to urging members to vote in those online polls that Trump is so proud of, but for a significant number of them, their guy got beat by a race traitor. A girl race traitor.