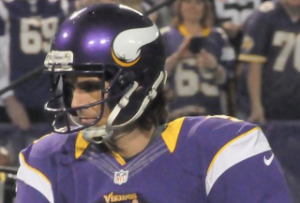 Ex-Minnesota Vikings player Chris Kluwe claims in a Deadspin piece today that he was let go from the team because of his outspokenness on gay marriage. Kluwe got particular attention for an open letter he sent to a politician who was offended that anyone in the NFL would back gay marriage, explaining sarcastically that gays “won’t magically turn you into a lustful cockmonster.”

After sending that letter out, Kluwe explains that then-head coach Leslie Frazier warned him against continuing to speak out on gay marriage, despite Kluwe’s insistence that he felt it was the right thing to do. Frazier backed down, for the time being, when he heard Vikings owner Zygi Wilf liked what Kluwe was doing.

[He] would use homophobic language in my presence. He had not done so during minicamps or fall camp that year, nor had he done so during the 2011 season. He would ask me if I had written any letters defending “the gays” recently and denounce as disgusting the idea that two men would kiss, and he would constantly belittle or demean any idea of acceptance or tolerance.

Months later, Vikings general manager Rick Spielman informed Kluwe he was out, but insisted it had nothing to do with his public views on gay marriage and other things (he received warnings for tweeting about the Catholic Church last year).

Kluwe didn’t buy any excuses about competition, and expresses a great deal of confidence that those views cost him his job.

I was fired by Mike Priefer, a bigot who didn’t agree with the cause I was working for, and two cowards, Leslie Frazier and Rick Spielman, both of whom knew I was a good punter and would remain a good punter for the foreseeable future, as my numbers over my eight-year career had shown, but who lacked the fortitude to disagree with Mike Priefer on a touchy subject matter.

The Vikings provided a statement today flat-out denying Kluwe’s allegations about his firing.

The Minnesota Vikings were made aware of Chris Kluwe’s allegations for the first time today. We take them very seriously and will thoroughly review this matter…