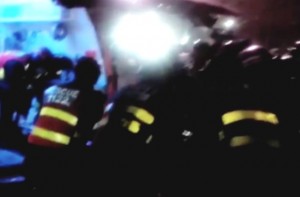 Over 50 people––including many children––were killed in an explosion at the Gulshan-e-Iqbal park in Lahore, Pakistan earlier today. Local authorities have said the explosion was triggered by a suicide bomber.

Pakistani Prime Minister Muhammad Nawaz Sharif released the statement after the deadly attack expressing grief for the victims and their families.

According to CNN over 200 people were injured in the blast. Some early reports have suggested that the park was specifically targeted because of Christians in the park celebrating Easter.

Ambulances quickly arrived on the scene to tend to the wounded.

No group has yet claimed responsibility for the attack, but The New York Times provided context for what else was happening in Lahore today:

It coincided with violence in other parts of the country as hundreds of protesters took to the streets, condemning the execution of Malik Mumtaz Hussain Qadri, who killed Salmaan Taseer, a governor who had campaigned for changes in the country’s blasphemy laws.

Protesters clashed throughout the day with police officers in Islamabad, the country’s capital, marching on the main avenues of the city and trying to force their way into the Red Zone, a high-security area that includes the Parliament building, the Supreme Court and many diplomatic missions. The police used tear gas to disperse the protesters, but appeared to be overwhelmed by their numbers.

You can see images from the scene below:

At least 52 people have been killed, mostly women and children, in Lahore, Pakistan https://t.co/lQd4i2Dvhd pic.twitter.com/AwLoeHf6hq

Meanwhile, #MQM Workers Gather Outside Hospitals Of #Lahore To Donate Blood On The Directives Of QET Altaf Hussain pic.twitter.com/CnXgXKKc4R

Most dead/injured in #Lahore said to be women+children. Here, an injured women is taken to a hospital. (Pix: Getty) pic.twitter.com/KnDAjgTGDV