Shortly after President-elect Donald Trump called Buzzfeed a “failing pile of garbage” at today’s press conference over their publication of a dossier that contained unverified (and likely unverifiable) claims that Russia attempted to compromise him, the site decided to offer shirts with the phrase on it for sale. 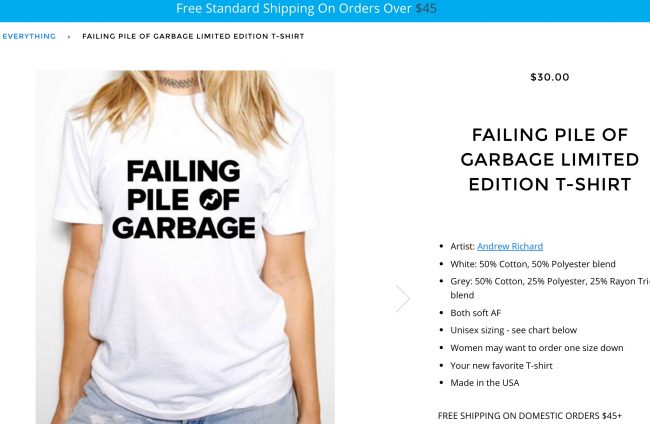 Right away, members of the media criticized the publication’s decision to immediately try to monetize Trump’s condemnation of them, especially considering the journalistic ethics they seemed to violate in publishing the disputed document.

And, just like that, you can buy a Buzzfeed “failing pile of garbage” t-shirt. Of course. https://t.co/tQ2HcjLl9Y

Maybe BuzzFeed should try to take this more seriously https://t.co/XyG7SnWoQu

Now, after those tweets were sent out, Deputy News Director Tom Namako sent out the following tweet, saying that the proceeds will go to charity.

And Legal Editor Chris Geidner highlighted that as well.

For those writing/talking about BuzzFeed selling “failing pile of garbage” merchandise, do note that all proceeds go @pressfreedom. pic.twitter.com/56zTzMrKuL

Now, there are serious discussions we can have about whether Buzzfeed’s release of the dossier — which is reportedly the basis of the two-page synopsis that CNN reported was presented to Trump at his intelligence briefing — is newsworthy. There are legitimate concerns we can express with Trump issuing thinly veiled threats at the publication about them suffering the consequences, perhaps indicating an attack on the free press.

However, all of that gets tossed out the window when Buzzfeed decides to do this tasteless stunt. (Yeah, despite claims that the money goes to the Committee to Protect Journalists, it is tasteless.) First off, it validates what incoming White House Press Secretary Sean Spicer said at the beginning of today’s presser — that the publishing of the dossier was just a “sad and pathetic effort to get clicks.”

How can Buzzfeed argue otherwise? It doesn’t matter what statements their CEO or Editor-in-Chief issues defending the newsworthiness of the document and their decision to run it. No. When you try to sell t-shirts off of the controversy you directly created, you cede any moral high ground. Especially when you consider how angry you’ve made other journalists and media outlets with your publication decision. (Such as MSNBC’s Chuck Todd, who called out Buzzfeed EIC Ben Smith to his face this afternoon, telling him he had “just published fake news.”)

The message you just sent with this action is that you can’t be taken seriously…and you don’t want to be. You’ve destroyed any legitimate news value that could have been generated from releasing the dossier by a combination of not vetting the document and then trying to sell merchandise off of your destructive actions. If there was any criticism of CNN throwing you under the bus with their statement defending their reporting, well, there isn’t now.

Beyond anything, you’ve done serious damage to media credibility in the Age of Trump. It is already apparent that we in the media are being targeted by Trump and his cohorts, who would like nothing more than the media as a whole to be absolutely despised by the American public and to be seen as completely untrustworthy. It seems you are making Trump’s case for him!