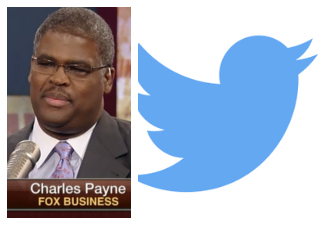 If you read my 15 predictions for 2015 over the break, you’ll see the one I had the most confidence in was the following:

At least 10 cable news personalities are forced to apologize for something they tweet… by March.

As you may have heard, Fox Business Network’s Charles Payne has jumped out of the starting gate first by admitting to tweeting out a fake photo–which many interpreted as racist–to slam the #BlackBrunchNYC protesters that made waves over the weekend. And on his show last night (Making Money with Charles Payne), the 54-year-old former Wall Streeter addressed the elephant in the room by saying yes, he made a mistake in tweeting out a 2009 photo–complete with a KFC logo that didn’t exist in the original–which had nothing to do with the protests he was protesting. However, following a pattern we see all too often when a cable news host or personality makes this kind of mistake, the apology always is accompanied by the “B” word… as in “but.” Per Payne:

“Listen, it was a mistake on my part, the picture, but everything I said was right.”

Sorry, Charles. This should have been the part when you punt, pray, and move on. Your point may have valid, but nobody’s getting past a fake, photoshopped photo to even listen at this point. Just ask Dan Rather how far the “fake, but accurate” strategy works in these situations.

So why does this keep happening to intelligent, successful people when it comes to social media? And please, take ideology out of it because these kind of errors in judgment have happened across Fox, CNN and MSNBC. Remember when MSNBC’s Chris Hayes tweeted out a report around a dead body at the height of the Ferguson protests in August?

Turned out the body was very much alive and was the result of a car accident unrelated to the protests.

How about CNN’s Bill Weir calling Fox Nation readers a bunch of “willfully ignorant f*cksticks” when it came to climate change?

This is a guy who was a respected reporter on Nightline and hosted a few shows in primetime on CNN… not exactly how one with that kind of position should express himself.

National, local, doesn’t matter what the paycheck looks like: Take Fox 19 (Ohio) anchor Tricia Macke , who once posted on her Facebook page that Rachel Maddow was “an angry young man” (because that won’t get noticed eventually by management or anything, which suspended her).

And of course, who could forget Justine Sacco, the PR exec who tweeted this before taking off on a flight to Africa? 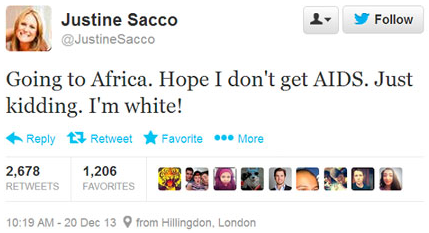 She was fired before she hit the tarmac. The examples are endless, but you get the point. So back to the original question: Why does this keep happening and what can be done?

The answers are quite simple: management at all networks need to get its on-air talent under control on Twitter or Facebook, which are unfiltered and therefore can lead to the kind of errors we’re seeing. Remember, social media isn’t like a hosting a program, where an approval process via pitch meetings and copy editing exists for the most part (extemporaneous comments notwithstanding). If a tweet itself is going on the air, you can bet a copy editor, producer and perhaps even an EP (Executive Producer) all viewed it and approved before being broadcast to the world. But when individual talent is away from the studio–sitting at home or on a train–with the unfiltered megaphone that is Twitter at his/her disposal, anything goes, without any kind of approval process or vetting.

As a result, in Payne’s case, for example, Fox Business/Fox News gets lumped in with an editorial decision made by Payne and Payne alone, which reflects poorly on the organization as a whole regardless of responsibility. Payne may have been speaking for himself, but he’s still a host of a Fox Business program under the Fox News umbrella. The line gets blurred. And that’s why senior management has to make a decision around how Twitter is used by those representing their respective networks on the air: either start suspending those who make a big enough mistake to warrant an unwanted vacation, or take away the social media accounts altogether.

If I’m running a network, I’d choose the latter of the two options, and here’s why.
Three words come to mind when it comes to ratings and cable news:

Twitter. Is. Overrated. At least when it comes to growing an audience in any considerable way…

Need proof? Piers Morgan has millions of followers (4.3 million to be exact) but that never translated to a big enough audience to even save his job at CNN despite being a prolific Tweeter. Meanwhile, Jon Stewart or Bill O’Reilly don’t have personal Twitter accounts, and they’re two of the biggest names in cable with loyal, relatively huge audiences. Same goes for personalities like Charles Barkley, who annually is the most sought-out sports analyst in television. All of that said, give MSNBC’s Touré credit: After making gaffe after gaffe on Twitter and having to apologize over and over, he’s been wise enough to put down the smartphone and not tweet in any capacity since May.

Charles Payne is the first cable news personality of the year to really step in it on Twitter. And as sure as the sun rises in the east and the Panthers lose by double-digits in Seattle this weekend, it will happen again unless the big bosses start to realize this is an issue that needs to be addressed…

And sooner than they think.