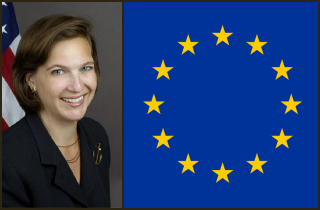 “Fuck the E.U.,” a woman who sounds like Nuland can be heard saying after describing how she got the United Nations to agree to send an official to the embattled Eastern European country.

The audio, posted to YouTube on Feb. 6, was first reported by the Kyiv Post, who have, thus far, been unable to verify the authenticity of the conversation. However, they report, a U.S. Embassy spokeswoman indicated that Nuland might address the audio during a press conference on Friday.

If the call is authentic, the Post reports, “it appears to have been made following President Viktor Yanukovych’s Jan. 25 offer to opposition leader Arseniy Yatseniuk to be prime minister and Klitschko to be deputy prime minister, offers both men refused. Mykola Azarov resigned as prime minister on Jan. 28.”

-WATCH: Ukranians Up the Protest Ante with a Fully Functional Catapult

More details of the call:

Nuland should reach out directly to him, he says, and “help with the personality management among the three.”

Before the call ends, Nuland tells Pyatt she has “one more wrinkle” for him.

Commenting on European pressure put on Yanukovych – or lack thereof – she explains that she has spoken to the United Nations and has gotten an official there who said that Ban Ki-moon, the UN secretary general, agreed to send someone to Ukraine to “help glue this thing and to have the UN glue it.”

We’ve reached out to the State Department and will update upon hearing back.