Over the weekend a Facebook post went viral on conservative Twitter purporting to describe an encounter between several NYPD officers and a Brooklyn Chipotle staff that made a “hands up don’t shoot” gesture and refused to serve them: 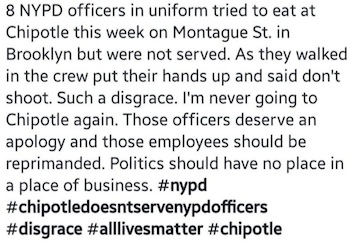 If that set off your “chain email from your tea party uncle” alarm, you’re not that far off. The hoax-debunking site Snopes noted the lack of specifics of the incident, especially the absent date, which both intimates that the incident occurred after the ambush-style murder of two NYPD officers last weekend, and allows the story to be shared for time immemorial.

Snopes contacted Chipotle, which dated the incident to two weeks ago (before the shooting of the two NYPD officers), and said that it was the “unplanned” action of a single employee, who has since been reprimanded, and was not condoned the individual restaurant or chain. According to Chipotle the officers were never refused service, but “left without ordering food.”

“We apologize to the officers involved. We serve law enforcement officials in our restaurants around the country every day, and we appreciate their service,” the chain’s Communication’s Director wrote. “Quite simply, this incident should never have happened.”

Nonetheless Chipotle spent most of Sunday getting trashed on social media:

@ChipotleTweets I refuse to eat at restaurants who condone lawlessness and hatred of cops and law abiding citizens. #BoycottChipotle

…though the restaurant no doubt appreciated the five stars this “Pants up don’t loot” guy gave them in his review: