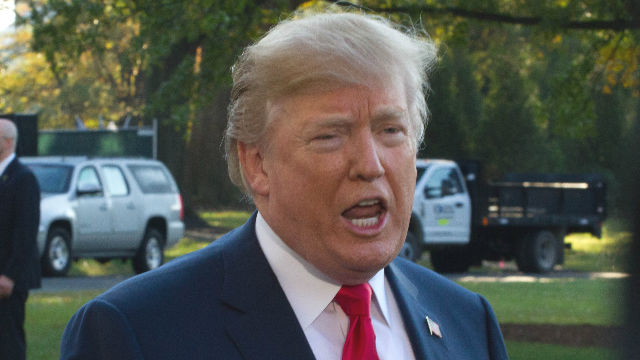 President Donald Trump gave an impromptu 30-minute interview yesterday to New York Times reporter Michael Schmidt and, well, it was positively full of nuggets. So many, in fact, that we are going to break down the best of the best, the weirdest of the weird. Here are the top five takeaways from the interview everyone is talking about this morning.

He Believes Robert Mueller Will Treat Him Fairly

There has been a whole lot of talk on whether or not Trump was gearing to fire Special Counsel Robert Mueller, priming the pump by calling the FBI corrupt nearly every chance he gets.

He struck a slightly more conciliatory tone during this interview, saying in absolute terms that there was “no collusion” between the Trump campaign and Russia but saying, ultimately, he believes that Mueller will treat him fairly.

He Thinks the Russia Investigation is ‘Very Bad For the Country’

While he emphatically exclaimed that his campaign did not collude with Russia, the Democrats did not receive the same treatment. He repeatedly stated, matter of factly, that Hillary Clinton and the Democratic establishment definitely collaborated with Russia, using the Steele dossier as his smoking gun. This segued into a diatribe on how the entire investigation needs to be completed as quickly as possible, for the betterment of the country.

“[The Democrats] made the Russian story up as a hoax, as a ruse.”

He Still Completely Downplays His Endorsement of Roy Moore

Though the president gave a full-throated endorsement to suspected sexual assaulter Roy Moore, the former judge ended up losing anyway. Ever since the Alabama Senate election, Trump has majorly downplayed his support of Moore, using his previous support for Luther Strange in the Republican primary as a jumping off point.

“I wasn’t for him. I was for Strange,” he said. “I brought Strange up 20 points. Just so you understand. When I endorsed him, he was in fifth place. He went way up. Almost 20 points. But he fell a little short. But I knew what I was doing.”

“If you look at my rhetoric, I said the problem with Roy Moore is that he will lose the election.”

Trump said he was, more or less, forced into endorsing Moore because he is the head of the GOP.

“I feel that I have to endorse Republicans as the head of the party. So, I endorsed him. It became a much closer race because of my endorsement. People don’t say that. They say, Oh, Donald Trump lost. I didn’t lose, I brought him up a lot,” he said. “He was not the candidate that I thought was going to win.”

“I never thought Roy was going to win the election.”

Deferred Action for Childhood Arrivals, otherwise known as DACA, is a program that defers deportation of undocumented immigrants who entered the country as children. Democrats have gone on record that they want the program renewed as part of a government funding deal. Trump has seemed fairly lenient on this in the past, but now, however, he says that without funding for the infamous border wall, there will be no DACA, even tweeting as much this morning.

“Look, I wouldn’t do a DACA plan without a wall. Because we need it. We see the drugs pouring into the country, we need the wall,” he said. “They take the worst people in the country, they put ‘em into the lottery, then they have a handful of bad, worse ones, and they put them out.”

One of the more shocking statements to come out of the president’s mouth was when he said his re-election was essentially a lock. Why? Because the press needs him and ratings would go down the tubes without the omnipresence of Donald J. Trump, painting a truly cynical picture of the fourth rail.

“I’m going to win another four years is because newspapers, television, all forms of media will tank if I’m not there because without me, their ratings are going down the tubes. Without me, The New York Times will indeed be not the failing New York Times, but the failed New York Times. So they basically have to let me win,” he said.