For Both Candidates, The Road To The White House Runs Through 2004

For Both Candidates, The Road To The White House Runs Through 2004 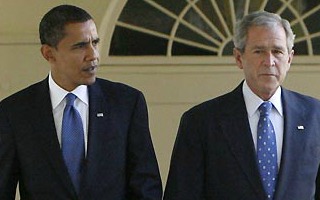 As we transition into the dog days of summer, the presidential election has officially reached stalemate status. Each day seems to bring a trickle of both good and bad news for President Barack Obama and his challenger, Gov. Mitt Romney. Some polls show the President building a respectable lead, while others say the race has tightened to a razor-thin margin.

Indications are that that Gov. Romney has a slight wind at his back heading into July. Recent jobs reports have diminished confidence in the strength of the recovery, and prominent Democrats are leery enough of the President’s popularity to say they’ll be skipping the convention. But a mix of targeted attacks on Gov. Romney’s wealthy background and his inability to connect with voters have prevented him from really pulling away. This is a story of a flawed incumbent against a flawed challenger, and it’s a story we have seen recently. This race is eerily reminiscent of Bush vs. Kerry. We’ve heard the analogy before, but it has become more apt as the race has continued.

Both years feature the sense of a missed opportunity for the party out of power to run an ideological favorite against a divisive incumbent president. Democrats had Gov. Howard Dean in 2004, who some argued would have been in a better position to defeat President Bush. There is little need to remind followers of this election of the various failed ‘anti-Romney’ candidates anointed to dispose of Mr. Romney and defeat President Obama.

In both years, the party out of power chose the Massachusetts moderate anyway. Sen. Kerry and Gov. Romney are politicians with the potential for broad appeal, but they seem unable to genuinely connect with their base or with the median voter. Their senses of humor often fall flat, and they are the underdogs in the ‘who would you rather have a beer with’ contest. You can’t even have a beer with the teetotaling Gov. Romney.

But also like Mr. Romney, Sen. Kerry was in decent position heading into the dead of summer. A July 8-11, 2004 poll from USA Today showed Sen. Kerry with a 5 point lead over President Bush. The Kerry camp and the DNC had just announced they were gaining ground in the fundraising race. The President faced criticism on the principle issue of that election, the Iraq War, in the form of damning intelligence reports and high U.S. casualty rates.

These three disadvantages for the incumbent have analogs in the 2012 race. An ABC/Washington Post poll released yesterday showed a tie between the President and Gov. Romney. The GOP and Romney camp also announced they outraised the DNC for the second straight month. On the principle issue of this campaign, the economy, the incumbent has faced a stream of bad news in the form of slow growth projection rates and a stagnant unemployment rate.

The summer buoyed the spirit of Democrats across the country in 2004, and the media caught on to the conventional wisdom:  James Zogby claimed the race was Kerry’s to lose. Chuck Todd asked if  a “Kerry Landslide” could be in order. But nagging questions about past-flip flops and the personality of the challenger chipped at Sen. Kerry’s early momentum, and President Obama will need exploit those same lines of attack to scare voters from an alternative to his incumbency. President Bush was aided by 527s and other outside groups who ran ads attacking Sen.Kerry’s military service and post-war activity. Priorities USA has started to see their attacks on Gov. Romney’s business record at Bain Capital pay off in battleground states, but it remains to be seen if the effects will build through the fall.

Why did the 2004 race turn towards the incumbent, and what can we learn from those lessons about the forces that will shape this election?

Which negative campaign will win?: The critical challenge for the Obama campaign is to frame voters’ understanding of Gov. Romney before he is able to do so himself. The Bain Capital attacks are an extended attempt to do this, and indications are that the targeted messages of Priorities USA will reap benefits similar to those generated by the swift boat attacks in 2004. Both lines of attack lay out a  justification for why the challenger should be disqualified from handling the prominent issue of the day (terrorism/foreign policy for Sen. Kerry, the economy for Gov. Romney).

If President Obama and his team are able to undermine Gov. Romney’s claim to the job-creator mantle by framing him as a heartless outsourcer with a Swiss bank account, they may be able to win on the election’s most important topic in a similar fashion to how President Bush won on terrorism/foreign policy. In effect, both incumbents claimed that  ‘no matter what you think of my handling of this issue, it is a huge risk to trust that my opponent will do any better’. Hardly an uplifting message of hope and change.

The difference in 2012 is that right-leaning Super PACs will have many millions more at their disposal to delegitimize the President in the same way he will attempt to delegitimize Mr. Romney. The question is if the targeted efforts of Priorities will be able to keep up with the attacks to come from well-funded right wing groups.

Self-inflicted wounds: Sen. Kerry was called aloof, out of touch, awkward, robotic, and Gov. Romney has been labeled in much the same fashion. Sen. Kerry committed gaffes that illustrated the idea he was unfit to be commander-in-chief, most famously saying that “I voted for the 87 billion dollars [for the Iraq war] before I voted against it”. Gov. Romney’s campaign has had to face similar criticism of flip-flopping on the individual health care mandate and other issues. These type of self-inflicted wounds are so important because they show the challenger as inconsistent on the crucial, controversial issues of the election. Gov. Romney has a governing history that often squares quite poorly with his positions in this and other elections. His changes of heart should provide the Obama camp with an opening to further delegitimize him.

As the summer of 2004 wore on, President Bush was the beneficiary of a good convention bounce, effective attacks on his opponent and fall headlines that aided his overall campaign message. A similar path to victory is possible for President Obama. The convention will present a chance for a major national speech, a weapon the President has wielded skillfully in places like Philadelphia and Denver. If the Bain attacks continue to stick in the battleground states, they could become the swift boat ads of 2012: perhaps overblown, but acutely unsettling to American’s view of the challenger. A tape from Osama Bin Laden released the weekend before the election arguably pushed President Bush over the finish line–would an unexpectedly strong jobs report on Nov. 2nd create a similar shift in the tone of the news cycle?

A major difference between 2012 and 2004 is that President Obama will face the best-financed barrage of attacks from outside groups Gov. Romney and the GOP ever. Given the growing fundraising gap, especially in the Super PAC game, the Bain Attacks may be drowned out by ads featuring the reemergence of Jeremiah Wright, along with claims that the President  raised taxes and failed to halt the economic crisis.

Democrats are also arguably less skilled at playing political hardball. Their biggest donors seem morally unwilling to fund the Super PACs that will deliver the President’s most important body shots. Prominent Democrats like Bill Clinton have thrown cold water on the Bain attacks, while GOP luminaries other than Sen. John McCain were not as quick to muddle the swift-boat message with criticisms.

The President certainly has his back to the wall, but recent history holds that he is not on the mat yet. If he can control Mr. Romney’s pre-convention rise, he might be able to rely on a mix of negative ads, timely news and the strength of his 2008 coalition to squeak by. This playbook is the sad reality of a political discourse that has only deteriorated since the 2004 election.

President Obama, who rose to prominence promising change from the Bush philosophy, will have to rely on his predecessor’s re-election playbook to secure his own legacy. Whoever said that politics makes for strange bedfellows was dead on.