Forgive Paul Krugman For Calling 9/11 ‘An Occasion For Shame’ 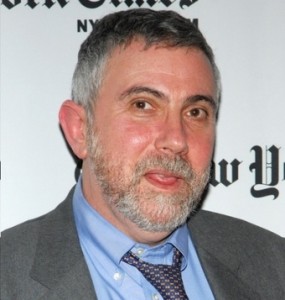 Nobel Prize-winning economist and New York Times conscience-disseminating liberal Paul Krugman has caused an uproar with a 3-paragraph (and change) blog post in which he, among other things, calls the anniversary of 9/11 “an occasion for shame.”

Krugman writes several stupid, wrong things in that small space, but upon reflection, I think critics left, right, and center ought to cut Krugman some slack. The 9/11 anniversary is a tough day for everyone, and people handle grief in different ways.

Krugman begins by asking one of the weirdest questions I’ve ever heard. “Is it just me, or are the 9/11 commemorations oddly subdued?”

What does he expect, beer bongs and a conga line?

He then pivots to the “deeply shameful” actions taken in the wake of the tragedy by “fake heroes like Bernie Kerik, Rudy Giuliani, and, yes, George W. Bush,” as they raced to cash in on the horror.”

Much of the conservative angst surrounding Krugman’s post centers around the propriety of launching such a political attack on such a solemn occasion. That’s a fair point (it’s not something I would do), but not particularly outrageous. I’m certain you couldn’t throw a rock in either blogohemisphere without hitting something just as partisan, or worse. Krugman’s central point, that post-9/11 America quickly became a deeply-divided place, is something that neither side can credibly deny.

He also alludes to political pundits who fell down on the job post-9/11, but he probably should have mentioned the journalism establishment that openly admits to giving President Bush a years-long pass.

But where Krugman really goes wrong is in connecting the commemoration of that day, and the day itself, to those divisions. The memory of 9/11 has been irrevocably poisoned,” he says. “It has become an occasion for shame. And in its heart, the nation knows it.”

Whatever you think of the political and policy implications of a post-9/11 world, or the partisan jousting that accompanies it, the idea that they could touch the memory of 9/11 is completely backwards. If one can, indeed, affect the other, it is the memory of that day that has the potential to be an antidote to that which has poisoned us.

You can chalk some of this up to the perils of trying to sum up 9/11 in a quickie blog post. In ten years, I don’t think I’ve managed to write more than a paragraph about the day itself. The events overwhelm the words. Every moment of that day is so frozen in time in my mind, I could write a volume about each one, and still come up short.

I usually spend the anniversary trying to avoid television entirely; the instant replay of the mind is vivid enough, thank you. Unavoidable are the thoughts of those thousands of souls, the horror of that lone tower, and minutes later, that empty space. I can’t scratch the surface of the things that remembering that day makes me feel, but I can say, conclusively, that shame is not one of them, and it never will be.

The grief and trauma of 9/11 affects people in different and powerful ways. That’s another reason I don’t write much about that day. If I woke up every September 11 and banged out the first five paragraphs that popped into my head, I’m sure the result would often be something as imflammatory as what Krugman wrote. For example, I sometimes get pissed off when I see “Never Forget” decals and the like, because I think, “Who the hell is that for? Who could possibly forget that?”

Ordinarily, I’m not afraid to make a flawed observation in anger, but where 9/11 is concerned, I’ve found it’s better to err on the side of shutting the hell up, lest my bitter pique intrude on someone else’s legitimate grief.

In that spirit, I hope that Paul Krugman realizes that the anniversary of 9/11 is not an occasion for shame. There are 364 other days on the calendar to work that out.