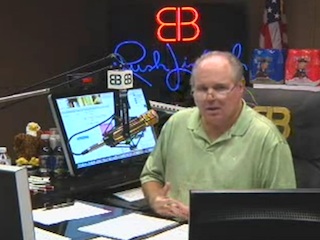 It’s not that Rush Limbaugh has anything against soup kitchens. On the contrary, he totally thinks it’s a “noble gesture.” However, he’s really not happy at all that President Obama was at one on Saturday. Why? Well, Limbaugh thinks it’s just one of the many ways that Obama and his administration are sending the wrong message to the world’s Muslims through their commemorations of 9/11.

So, wait. How do you diss a guy for taking his family to help out at a soup kitchen? Well, it all has to do with Limbaugh’s dislike for the administrations declarations of 9/11 as a “Day of Service.”

“Now doesn’t making the anniversary of 9/11 into a national Day of Service make it seem like we’re the ones who have to make amends? Community service? That’s, in many cases, part of a punishment that’s handed out to people or a deal that’s made with them. We have something to apologize for, to be sorry about, that America was somehow in the wrong, that there’s something to make up for so we must have a Day of Service.”

Limbaugh went on to explain that, even if that were not the message of the trip and the “Day of Service” in general, it would certainly be “how it would be perceived by the rest of the world, especially the Muslim world.”

He went on to wonder how the “tone-deaf” administration, if they didn’t make that connection, could think a soup kitchen would relate to 9/11. He finally decided that Obama was merely going to “visit the beneficiaries of his policies.”