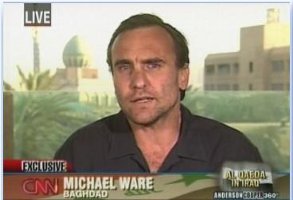 Michael Ware won acclaim (and some enemies) for his reporting from Baghdad during the Iraq War, up until leaving CNN (or taking a “leave of absence”) earlier this year. But the up-close-and-personal stories he did took a psychological toll, and Ware wants to get the word out about what he saw – including, according to Australia’s Brisbane Times, a shot to the back of the head of a weapon-carrying teen. CNN never aired the clip.

From the Brisbane Times’ report:

Mr Ware tells of the alleged incident he says he witnessed and filmed in 2007 when working for US news giant CNN, but claims the network decided the footage was too graphic to go to air.

He alleges that a teenager in a remote Iraqi village run by the militant Islamist group, al-Qaeda was carrying a weapon to protect himself.

‘‘(The boy) approached the house we were in and the (US) soldiers who were watching our backs, one of them put a bullet right in the back of his head. Unfortunately it didn’t kill him,’’ he tells Australian Story.

‘‘We all spent the next 20 minutes listening to his tortured breath as he died.

He allages [sic] the incident was ‘‘technically’’ a breach of the Geneva Convention or ‘‘a small war crime if there’s such a thing’’.

Of course, the fact that this was such a brutal moment to witness seems precisely why CNN never aired it, which they confirmed in a statement to HuffPo’s Jason Linkins:

“CNN often has to make calls about which disturbing images are necessary to tell a story, and which are too graphic. These are always challenging, and the subject of reasoned editorial debate. On this occasion we decided to not show an Iraqi insurgent dying with fatal wounds.”

Still, it’s also easy to see, from Ware’s point of view, why such images should air even if they’re hard to stomach: they happen, and if a nation’s going to be in a war, the people of that nation should understand what that can entail. Indeed, Linkins also quotes a Men’s Journal profile of Ware from two years ago, a piece that made it clear just how disillusioned war can make someone. Among other things, Ware said he didn’t “know how to come home” and that “we need to constantly jar the sensitivities of the people back home.”

Such an attitude, Linkins notes, didn’t always endear Ware to politicians (Rep. Duncan Hunter of California asked at one point if “CNN want[s] America to win this thing”), but after all, Ware’s job wasn’t to make friends with lawmakers – it was to report on what he was seeing in a war zone. Often, it won’t be pretty. We can understand why CNN wouldn’t want to show it all (the “death porn” allegations Dan Abrams said MSNBC faced in re-airing 9/11 coverage, for example), but we can understand why Ware would want to show it all. It’s the same reason Stephen Colbert chides the media for ignoring the Iraq War: it’s a war. We don’t like to see it, but we have to see it…no matter how difficult it might be.