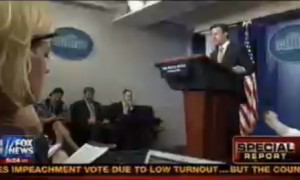 There’s a large segment of conservative news consumers who feel a pitiful resentment at the fact that a Democratic President named Barack Hussein Obama pushed the button on the raid that killed Osama bin Laden, and outlets like The Daily Caller cater to that brand of resentment, most recently by promoting a fact-challenged attempt to discredit the President’s decision. Fox News bit down hard on the story Monday, and the White House bit back, calling it an “utter fabrication.”

The allegation, raised in an upcoming book by conservative author Richard Miniter, is that President Obama “canceled the ‘kill’ mission in January 2011, again in February, and a third time in March. Obama’s close adviser Valerie Jarrett persuaded him to hold off each time.”

Fox News Chief White House Correspondent Ed Henry asked about the story, sourced to a single unnamed member of the Joint Special Operations Command, at a Monday briefing aboard Air Force One.

Here’s how Ed asked the question (emphasis mine): “There’s a book out by an author, Richard Miniter, who in context seems like a critic of the President and is claiming that he has information that the bin Laden raid was called off a few times, in part because Valerie Jarrett suggested to the President that he call it off.  Does the White House have any reactions, whether this is factually correct?”

Principal Deputy Press Secretary Josh Earnest replied, “That is an utter fabrication.  It seems pretty clear that Mr. Miniter doesn’t know what he’s talking about.  Ms. Jarrett, like many — like the vast majority of the President’s senior staff, was not read in the operation, on the mission against Osama bin Laden.  So I wouldn’t put any stock into that vignette — or into the book itself.”

So far, so good. As a matter of fact, the book’s allegation is not just thinly-sourced, it’s also contradicted by loads of on-the-record, multiple-sourced contemporaneous reporting that shows Miniter’s fantasy couldn’t possibly be true. When Miniter’s source says President Obama was canceling the mission, there was no mission yet.

But good for Ed Henry for checking anyway, and for framing the allegation as the claim of an administration critic. Most news organizations, faced with a thinly-sourced, powerfully contradicted claim by a partisan author, and an on-the-record denial, would leave this story on top of the garbage heap where they found it. In fact, all of the other news networks did just that.

Gone is Ed Henry’s question, and accompanying context, replaced with an identification of Miniter as a “New York Times Best-Selling author,” just an ordinary writer of books, completely disinterested in partisanship. (Miniter’s “best-sellers,” it should be noted, were aided by the old conservative scam of pumping up a book’s numbers with bulk purchases, then giving them away at places like CPAC.)

No, what we have are “new questions,” which reporter Shannon Bream fails to weigh against all of the previous reporting that contradicts Miniter, and which she gives equal weight with an on-the-record statement from JSOC that the only member present at the meetings says “the President never wavered” on the mission. This is how “you decide” works, by giving equal weight to unequal facts (or absence thereof).

There’s a responsible way to report on garbage like this, if you must, and it looks like Ed Henry was trying to do that. How he would feel about the way his reporting was misused by Bream is anybody’s guess, but most good journalists (a set which includes Ed Henry, and anchor Bret Baier) would be incensed.