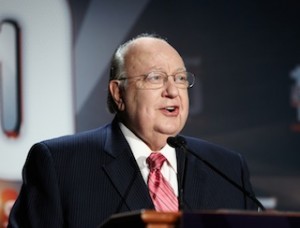 Fifteen years ago, a new cable news channel began broadcasting among a fairly loud chorus of media skeptics. “Fledgling Fox News” was an oft-repeated refrain by the media establishment, and oddly, became a rallying cry with founding Fox News Chief Roger Ailes and his loyal support staff. This “us against the world” mentality that has led them to their inarguable position as the most dominant cable news outlet for nearly the last decade. Last night, I was able to attend, on behalf of Mediaite, the 15 year celebration at New York’s Chelsea Piers, and caught up with Mr. Ailes, plus on-air stalwarts like Bill O’Reilly, Shep Smith, Greg Gutfeld and many others.

Never before would I have thought to write the phrase “ain’t no party like a Fox News party,” but here we are. An open bar, generous buffet and upbeat DJ created a predictably joyful — if not relaxed and loose — background for the staff to take a victory lap for creating a cable news outlet that many cynics predicted would last maybe two years. In case anyone forgot about the naysayers from 15 years ago, it was an oft-repeated theme, and for good reason. Many Fox Newsers still seem driven to succeed by the volume of critiques. This was an employment-only event — there were no non-Fox News people there, apart from myself and one other reporter — which seemed a consistent and organic by-product of the esprit de corps which plays a big role in FNC’s overall success. 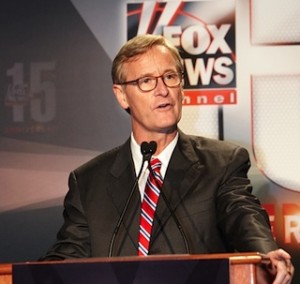 From an outsider’s perspective, Fox News appears to have endured a stunningly low amount of staff turnover in the last decade and a half, and in fact, anyone who had been on board since the beginning seemed to boast about that as though it were their own “red badge of courage.” So it made some sense that one such alumnus, Fox and Friends host Steve Doocy, would introduce the man of the hour, Mr. Ailes, who delivered a speech that was equal parts proud, relaxed and charming. After running a video clip that featured the big stories that FNC was built on in the early years — the Menendez Brothers, Oklahoma City bombing and, oh yeah, that Monica Lewinsky scandal (and notably missing Glenn Beck) — Doocy reminded the crowd of the naysayers, before lauding Ailes for creating Fox News “out of whole cloth.”

Ailes then took the podium to a rousing ovation that even got top dog Bill O’Reilly out of his chair in a standing show of respect for the architect of Fox News. Ailes graciously thanked Doocy for the kind words, before charmingly reprimanding the morning host for “skipping two paragraphs that I wrote.” He then mentioned a USA Today article from September 23rd 1996 that stated ‘Ailes tackles toughest assignment’ before good-naturedly quipping “I didn’t even know O’Reilly then.”

NEXT>>>> Roger Ailes comments and insight from O’Reilly, Shep and Others