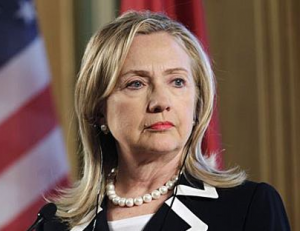 Secretary of State Hillary Clinton‘s concussion has been the subject of much discussion, particularly among those who were dismayed that it left her unable to testify on Benghazi when she was originally scheduled to. A few days after Clinton fell ill, Fox News producer/correspondent Justin Fishel asked about it during a press briefing — and, per a Washington Post report, later received a less-than-thrilled response from a State Department spokesman.

Toria, can you expand on why Secretary Clinton can’t testify on Thursday about this? It seems that she has not been available to testify on the Benghazi situation on some very key dates, including the Sunday after 9/11 and now this Thursday.

Well, first of all, Justin, let me say again, the Secretary had anticipated testifying; she had committed to do so with the two committee chairs. As we put out on Saturday, she is still under the weather. She was diagnosed as having suffered a concussion, and her doctors have urged her to stay home this week. So it’s on that basis that she’s asked for the committees’ understanding, and the two committees have been very understanding to have her two deputies come up this week to testify in open session as they will on Thursday. But it was her intention to be there. If she had not been ill, she would be there. And she’s also committed, including in a letter today to the committee chairmen, that she looks forward to having an ongoing conversation with them herself.

Apparently, this type of questioning did not sit well with State Department spokesman Philipe Reines, who, according to the Post, sent Fishel (and Fox News’ Bryan Boughton) the following sharply worded email:

We owe you an apology. And I’m adding Bryan so he’s aware of how badly we erred. I’m almost embarrassed to even admit this – but somehow your question at today’s Daily Press Briefing was somehow completely mauled and transcribed in the release below this way:

“Toria, can you expand on why Secretary Clinton can’t testify on Thursday about this? It seems that she has not been available to testify on the Benghazi situation on some very key dates, including the Sunday after 9/11 and now this Thursday.”

I just called them and read them the riot act for putting such misleading, accusatory, and absolutely asinine words in your mouth. Because after what we and her doctors explained over the weekend regarding her health, you couldn’t possibly have been insinuating the ulterior motives that question implies. No way. No credible journalist would do that without any basis whatsoever. But even more so, I really went to bat for you with folks here and told them that while I know the media can often be incredibly self-involved, there is no way you, an informed reporter, would equate one’s testifying before the United States Congress – made up of duly elected Senators and Representatives empowered by Article I of our Constitution – with going on tv. I don’t know Chris Wallace all that well, but I’m pretty sure he wouldn’t place his television show on par with one of the three branches of our government. And therefore, saying that this has happened on multiple ‘key dates’ is simply a blatant lie and grossly misleading to the public.

Anyway, our sincere apologies. If you send us what you really said, I’ll make sure it’s properly reflected.

Sarcasm appears to be Reines forte.

Questioning or mocking Clinton’s concussion wasn’t particularly hard to come by — with Fox News host Greta Van Susteren even calling out her own colleagues for being “snarky” about someone’s health.

Since then, Clinton has been discharged after hospitalization for a blood clot that was found during a follow-up doctor’s visit a few weeks after the concussion.