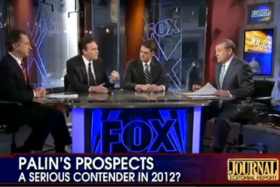 Here’s one that could have fallen under the radar amid “Retardgate” and that too-close-for-comfort Glenn Beck interview. Fox News’ weekend Wall Street Journal partner program, the Journal Editorial Report, ran a segment Saturday analyzing Sarah Palin‘s chances at a successful presidential run in 2012 in light of a recent poll finding that 71% of Americans think she is not qualified for the job.  Stuart Varney, in for Paul Gigot, lead the round table in a discussion on Palin’s chances in 2012. The commentators turned on Palin, with the ones trying to find the sunny side of the former Alaska governor slamming her even harder than her detractors.

Joseph Rago and Bret Stephens took the direct line of attack, with Rago answering a question about Palin being the brightest, most exciting Republican politician of her time: “Sure, but what does that say about the Republican Party?” Stephens’ response to the same question? “The freshest, maybe. The brightest, I’m not so sure.” He continued by claiming that he got from Palin “the distinct sense that if you ask her a follow-up question she would have no idea how to answer it,” which Varney called “mockery.” Answering to her likability, he posited that “It’s easy to like Palin because the people who hate her are themselves so dislikable.”

Collin Levy sprung to her defense, and in doing so possibly did the most damage of all: “They like her because she seems like a minor-leaguer,” she noted, referring to the hand-note incident at CPAC the Tea Party convention last week. And, concluding the discussion with a comment on Palin’s potential leadership: “She doesn’t need to be a leader. She just has to be something of a party mascot.”

There is something surreal about a Fox News segment dedicated to disparaging a Fox News employee. How different is it to call a pundit-in-arms a “party mascot” (even as a compliment) than to call them “sad and pathetic,” for which Joe Scarborough got a slap on the wrist at MSNBC? Palin is no longer a potential presidential candidate acting independently of the company that employs them, but a coworker. She would not be such a ratings draw if the threat of her returning to public service were minimal, nor would she be on the network if it did not provide her such a powerful platform to not-campaign– it’s a win-win situation. Another question is whether Fox News would be rooting for Palin the politician or against her. Keeping her on the airwaves and out of the White House would certainly be more lucrative, but in the long term having a former employee be the most powerful person in the world would be fantastic for scooping fellow news outlets. The former being more attractive to them would at least explain this article that ran alongside the video, legitimizing the Scott Brown for president movement by noting that a run in 2012 “wouldn’t look much different from Obama’s in 2008.”