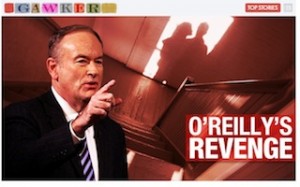 Earlier today Gawker published the much ballyhooed “bombshell” story that Nick Denton had previously alluded to as the supposed motivation behind what appeared to be a recent spate of attacks made by Fox News outlets towards Gawker. The story, reported by John Cook, alleges that Fox News host Bill O’Reilly may have sought a police investigation into a detective who had is alleged to have had a relationship with O’Reilly’s wife.

Some background: In the past few weeks there seems to have been some sort of coordinated effort by various Fox News’ outlets to sully the journalistic standing and impact of Gawker. Most recently, Fox and Friends aired a segment that claimed that many liberal websites were down in traffic, then asserted that Gawker was down 75%. Denton, the founder of Gawker Media, revealed via twitter that they had a story planned that explained why Fox News was so wrathful to his site, which Fox News has denied.

Cook’s story is an anonymously sourced report that strongly suggests that O’Reilly pressured a local police department to investigate the man with whom his wife was allegedly having an affair. The man also happened to be a detective within the police department. Cook makes a reasonably decent case that O’Reilly may have, in fact, complained to the cops. Despite mostly anonymous sources, Cook provides many key details, and names many of the key figures.

When reached, a Fox News spokesperson told Mediaite “Gawker has been lying about Fox News for several years and we are not going to dignify this with any further comment.”

There is no question that Fox News is a polarizing media outlet that spawns fierce loyalty amongst many of its viewers, and intense loathing from its detractors. While Gawker is likely thrilled to be engaging in a so-called media feud with the media giant Fox News, one could objectively criticize the level of journalism in Cook’s piece. While this post raises some interesting questions, the story is centered on Bill O’Reilly’s failing marriage, which is a remarkably personal attack for an – at-best – inconsistently sourced report, that feels to this media critic as a a dressed-up excuse to personally attack O’Reilly, and to escalate a feud with a news organization that has demonstrated its willingness to punch down.