Fox’s Peters, Dash Amateur, Unprofessional with Contrived Expletives; Both Should be Suspended
Opinion

Fox’s Peters, Dash Amateur, Unprofessional with Contrived Expletives; Both Should be Suspended 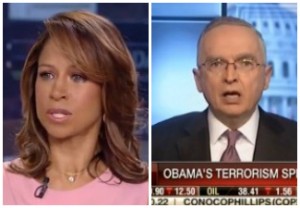 This really needs to stop.

It happened two months ago with Fox News contributor Rich Lowry (declaring Carly Fiorina had cut off Donald Trump’s manhood–but used the exact term for those two vital manly parts–with the precision of a surgeon) and has happened twice since… in the same day on the same network, no less. “It” being alleged broadcast professionals –those who have been on the air and/or in front of cameras long enough to know where the line is on being provocative and being profoundly immature and unprofessional — using expletives on live television to show they really, really care about whatever point they’re making.

In today’s case, FNC Contributors Ralph Peters and Stacey Dash were reviewing the president’s speech from the Oval Office last night about the San Bernardino terror attack and the war on ISIS in general. The speech has since been widely panned obviously in conservative circles but even some liberal ones for being limp, unspecific, without passion. Regardless of the perception, there are ways to critique and ways not to critique. And both Peters and Dash looked at the aforementioned line, knew what they were about to say would make Twitter explode and decided to jump over it. Peters with the word “Pussycat” (without the “cat” part, and was promptly scolded by host Staurt Varney) and Dash with an S-bomb (which was partially cut off by Fox cenors) to describe a sitting president on national television. No matter…the intent is the point here.

And please, save the argument that both were just being passionate and couldn’t contain their displeasure with the president’s response thus far to Paris and San Bernardino. If each were on the air right after Mr. Obama’s remarks on Sunday night, you may, may have an argument around the heat of passion or emotion hard to contain (it still doesn’t justify ever letting those words slip). But both were booked more than 12 hours after the speech was over. There was plenty of time to absorb, compartmentalize and regurgitate their thoughts — and yes, I’ll keep using this word — professionally.

Some will likely instruct me to grow up, to be able to handle tough words being used. Delicate ears, right? Wrong. That’s not even remotely the point. Instead, the focus should now be on how Fox brass decides to handle this to send a clear message to the rest of its talent that rhetoric like this cannot be tolerated:

Should Peters and Dash apologize? Yes. They shouldn’t even have be told to.

Should they be given an early Christmas break for a week or two to think about what they did before being put back on the air? Yup.

The news is more about opinion than ever before. In some cases, fervent, heated reactions takes over. If not overused and actually genuine, it makes for compelling TV.

Apologies are fine. With apologies comes accountability: Both should be suspended the same way MSNBC suspended Mark Halperin for calling the president a Dick Nixon (without the “Nixon” part). You want to speak like that? Go to HBO or Sirius XM.

Fox — like CNN or MSNBC — is a news organization first. Regardless of whether a straight, hard news report is being provided or an opinion is being given in a pundit role, the same rules apply: Certain words should not be used. Not because the news is G-Rated, because it completely distracts from the argument being made.

All while sounding so amateur, so, you know… unprofessional.