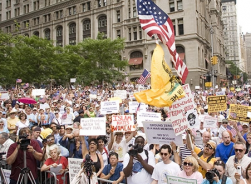 Will the ginned-up furor over the Park51 Lower Manhattan mosque threaten the county’s national security in the long-term? Frank Rich seems to think so. In today’s column Rich focuses less on the First Amendment or property rights that have been predominant in the mosque debate, and instead goes straight for an angle that has received somewhat less coverage but was a top concern to the administration following 9/11, namely that this anti-mosque fervor may be putting both American troops in the Middle East, as well as our national security at home, at risk. Says Rich:

Here’s what’s been lost in all the screaming. The prime movers in the campaign against the “ground zero mosque” just happen to be among the last cheerleaders for America’s nine-year war in Afghanistan. The wrecking ball they’re wielding is not merely pounding Park51, as the project is known, but is demolishing America’s already frail support for that war, which is dedicated to nation-building in a nation whose most conspicuous asset besides opium is actual mosques…it has also rendered Gen. David Petraeus’s last-ditch counterinsurgency strategy for fighting the war inoperative. How do you win Muslim hearts and minds in Kandahar when you are calling Muslims every filthy name in the book in New York?

Here’s how he sees it playing out at home:

And then Rich dives right into the whole Nazi mudfight:

If the cleric behind Park51 — a man who has participated in events with Condoleezza Rice and Karen Hughes, for heaven’s sake — is labeled a closet terrorist sympathizer and a Nazi by some of the loudest and most powerful conservative voices in America, which Muslims are not?…Now, when the very same politicians and pundits who urge infinite patience for Afghanistan slime Muslims as Nazis, they will have to explain that they are not talking about Hamid Karzai or his corrupt narco-thug government or the questionably loyal Afghan armed forces our own forces are asked to entrust with their lives.

If this controversy continues on, and it looks like it might barring another big end-of-summer news story, one imagines supporters of the mosque and/or opponents of the opponents taking this line of attack; it’s one that would likely be unwelcome by a slew of conservatives running for reelection this fall.