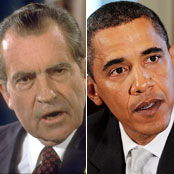 Past is prologue. Everything old is new again. These seem to be themes permeating this week’s Sunday Times op-ed page. Maureen Dowd devotes her entire column to a (admittedly not terribly conclusive) comparison between Holly Golightly, and Betty Draper. Frank Rich meanwhile draws further comparisons between the release of the Pentagon Papers in 1971 and this week’s WikiLeaks dump, right down to the White House (ish) wedding that a accompanied both.

IT was on a Sunday morning, June 13, 1971, that The Times published its first installment of the Pentagon Papers…But if we were titillated that Sunday, it wasn’t immediately clear that this internal government history of the war had mass appeal. Tricia Nixon’s wedding in the White House Rose Garden on Saturday received equal play with the Pentagon Papers on The Times’s front page. On “Face the Nation” the guest was the secretary of defense, Melvin Laird, yet the subject of the papers didn’t even come up.

The same can definitely not be said about WikiLeaks…it has dominated today’s shows. Rich also notes that like the Pentagon Papers the WikiLeaks boasted no big reveal, but that the long-term effect may be similar.

No, the logs won’t change the course of our very long war in Afghanistan, but neither did the Pentagon Papers alter the course of Vietnam. What Ellsberg’s leak did do was ratify the downward trend-line of the war’s narrative. The WikiLeaks legacy may echo that. We may look back at the war logs as a herald of the end of America’s engagement in Afghanistan just as the Pentagon Papers are now a milestone in our slo-mo exit from Vietnam.