Frank Rich: Obama Is The Rodney Dangerfield of 2010

Frank Rich: Obama Is The Rodney Dangerfield of 2010 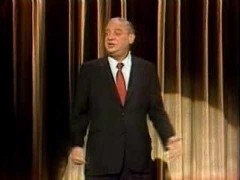 So what about all that change we were promised by Candidate Obama back in 2008? According to Frank Rich today, it’s not that the change hasn’t happened it’s just that apparently we haven’t been paying enough attention to it, or alternately, President Obama has utterly failed to successfully inform the country about it.

President Obama, the Rodney Dangerfield of 2010, gets no respect for averting another Great Depression, for saving 3.3 million jobs with stimulus spending, or for salvaging GM and Chrysler from the junkyard. And none of these good deeds, no matter how substantial, will go unpunished if the projected Democratic bloodbath materializes on Election Day.
[…]
The reasons for his failure to reap credit for any economic accomplishments are a catechism by now: the dark cloud cast by undiminished unemployment, the relentless disinformation campaign of his political opponents, and the White House’s surprising ineptitude at selling its own achievements.

However, it’s not merely ineptitude at PR on Obama’s part, says Rich, it’s also that he went soft on Wall St.

The Obama administration seems not to have a prosecutorial gene. It’s shy about calling a fraud a fraud when it occurs in high finance.
[…]
Since Obama has neither aggressively pursued the crash’s con men nor compellingly explained how they gamed the system, he sometimes looks as if he’s fronting for the industry even if he’s not. Voters are not only failing to give the White House credit for its economic successes but finding it guilty of transgressions it didn’t commit.

This is probably as close as Rich will ever come to calling Obama a humanoid.