From “Lone Wolf” to Taliban: The Disconnect In The Developing Times Square Bombing Story

From “Lone Wolf” to Taliban: The Disconnect In The Developing Times Square Bombing Story 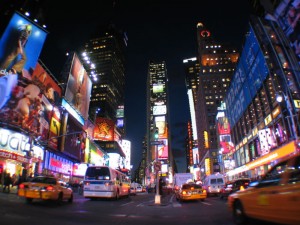 Any story is going to be defined by the facts as they emerge, and, conversely, be undefined at the beginning when there are giant gaping holes in the basic questions of who, what, where, why, and how. In the case of the Times Square S.U.V. bomb, the “who” and the “why” were the two most critical questions, as well as the larger question of “how” — not just “crude S.U.V. bomb that luckily didn’t go off” but also “how was he trained” and “how was he funded.” As the NYT’s James Barron first pointed out, the “who” and “why” was not known at first — but that didn’t stop people like Homeland Security Secretary Janet Napolitano, Mayor Michael Bloomberg and Senator Chuck Schumer from characterizing the event as potentially a “one off” by a “lone wolf” who might have been “homegrown, maybe a mentally deranged person, or somebody with a political agenda, that doesn’t like the health care bill or something.” That’s a far cry from Bloomberg on Saturday night: “We have no idea who did this or why.”

In retrospect, of course, they were wrong. And in retrospect, it seems clear what they were trying to do — or, more specifically, not do: jump to conclusions about al Qaeda and the kind of organized, institutional terrorism that New York City remembers all too well. It wasn’t until Monday night and the arrest of Faisal Shahzad that the story turned. In retrospect, that sort of seems strange, too.

Here is some totally unsupported speculation, but the more I think about it, the more I think it was a factor: I think that if this had not occurred on the same night as the White House Correspondents Dinner, the narrative would have been different. There would have been less of the “homegrown” meme, and more rigorous engagement on the story all around. Here’s an excerpt of what I wrote on AOL News:

It was somewhere around the 9:30 mark when I first saw the news — on Twitter, of course. My friend Anthony De Rosa, who only moments before had been making fun of Jay Leno, tweeted: “NYT NEWS ALERT: Times Square Evacuated After Police Suspect a Bomb in S.U.V.” On the TV, Leno continued with his set, to muted laughter. On my Tweetdeck, new tweets kept popping.

But other than Bloomberg, who beelined straight for New York to give a press conference in his tux, the reports of the Times Square car bomb didn’t seem to interfere with anyone else’s evening. There was only supposed to be one Big Story that night, after all: The White House Correspondents Dinner. Even Barack Obama knew that; he was going to Louisiana to survey the oil spill, sure, but not until the next morning.

By the time the dinner ended, the actual triggering events — the car, the fire, the twitstorm — had passed. As I came down the steps to the Hilton Concourse, I saw Leno posing with two teenaged girls, near NBC News President Steve Capus and his star anchorman, Brian Williams. Nearby, Rahm Emanuel was chatting with two men as I hovered; Republican National Committee Chairman Michael Steele was a few steps away, laughing.

Later that night, Emanuel attended the star-studded Bloomberg/Vanity Fair party, and Capus went to his own company party, the MSNBC bash, where giant posters featuring the faces of MSNBC anchors overlooked the room as many of those same people danced to Kool and the Gang. Ironically, there were no TVs anywhere.

Just before 2:30 a.m., I saw NBC News’ Chuck Todd heading out; he’d had no emergency White House press conference to attend. If there was any night for the White House correspondents to be off-duty, it was this one.

My only source of news about the bombing all night was Twitter. I told people about it after the dinner, who had had no idea. And while I was monitoring the situation via Twitter, I was not tweeting about it, or reading about it elsewhere. I was not glued to CNN or preparing reactive posts for this site or really anything — after all, I was out and about for NerdProm.

I’m not implying any dereliction of duty. I’m just saying, when you’re not distracted by X,Y or Z, you can focus on everything else. If you’re at a personal event and Twitter explodes, you’re dying to get to a computer; if you’re at an event with everyone else, well then, the news can clearly wait. So if I’m looking around and Rahm and Chuck Todd and whoever are still at ease, you’re going to be at ease, too. Those who are on duty will be on it either way, but the great swing-vote masses who might on any other night sink their teeth into a story like this (a bomb! In Times Square! Hello!) were, well, otherwise occupied. And I can’t help but wonder if that absence affected the tone and tenor of the overall coverage.

I’m not talking about how NBC or CBS News reported on it the next way, obviously (or ABC, though Diane Sawyer was the only Big Three anchor not in attendance). I’m talking about how a larger story — the kind everyone leaps on immediately, and if you don’t know what I’m talking about think “Lipstick on a Pig” — can just catch fire, with influentials on Twitter driving certain themes and ideas flying back and forth through interlinked blog posts. I mean, we saw how easy it was for “NerdProm” to become an institutional term of art.

There will always be big events, and there will always be news that inconveniently happens on them. The news doesn’t wait for you to pencil it in, after all (see: Christmas Day Underpants Bomber.) But don’t think for a moment that doesn’t influence coverage. It does, just as do competing events, competing deadlines, and whether Sarah Palin says something crazy on her Facebook page. So, as I said yesterday, I can’t help wondering how things might have proceeded had this all happened when the tuxes and ballgowns were back in the closet.