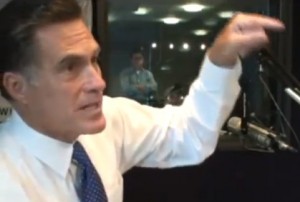 In the waning days of the 2012 presidential campaign, a clip from a 2007 Mitt Romney interview has resurfaced, the dual purposes of which seems to be to otherize the Mormon candidate’s religion, and to raise questions about his temperament. The video, filmed without Romney’s knowledge during a commercial break on Iowa radio host Jan Mickelson‘s show, features a fired-up Romney explaining, among other things, his religion’s view on Missouri’s role in the apocalypse, and the role Mormonism’s freedom of choice plays in his abandonment of pro-choice politics. The full video of that interview is epic, and revealing.

If you just watch the clip that’s been getting all the attention (over a million hits since Wednesday), Romney comes off like a lunatic, and for undecided voters who may have trouble remembering which Mary had the little lamb as opposed to Jesus’ mother, his conversation with Mickelson over Missouri’s role in the End Times must sound like Klingon badminton rules. To most of us, the fact that these two guys agree that Jesus will come back and “split the Mount of Olives” to “stop the war that’s coming in to kill all the Jews,” and only disagree on the existence of a Missouri satellite office, means they’re closer together than they are far apart (Obama supporters know that He has already come back, and will defeat Satan with His awesome ground game in Ohio).

Romney also explains how the Mormons believe that it is possible to personally oppose abortion, yet not impose that belief on others, which Romney uses to demonstrate how his current attempt to impose that belief on others is just as consistent as his prior commitment to protect choice. It’s remarkable in that it’s exactly how I would explain the issue of abortion rights to a fifth-grader. “We are vehemently opposed to abortion, ourselves, and for ourselves,” Romney says of his church, “but we allow other people to make their own choice.”

Then, toward the end of the clip, there’s a bit of amusing commotion in the control room behind Romney, while the candidate actually walks over to Mickelson and stands over him, pointing in his face in the reflection from the glass as he defends his anti-abortion record, then walks the hell out:

The full video probably won’t change your mind about Romney regarding religion or abortion (except to reinforce the rightful terror you may already feel about his assurances that Roe V. Wade is safe), but it does reveal something completely different about the candidate’s temperament. If you’re playing along at home, Romney and Mickelson begin with a contest to see who worships Cleon Skousen‘s feet more devoutly, which becomes frightening in context, as Mickelson explains to Romney that Skousen thought that presidents should just ignore the Supreme Court when they felt like it. They spent a good six and a half minutes on Cleon Skousen, which is probably why no one has watched this version of the interview. It’s worth watching, though, just for Romney’s priceless reactions to Mickelson’s lunacy.

None of this helps Romney with people who already don’t like him, or hurts him with those who do, but things get interesting during the first commercial break, at around the 10:30 mark. First of all, following a textbook example of the Romney Nervous Laugh, you hear Mickelson specifically tell Romney he’s speaking to him about “my own opinion, off the air,” a clear deception given his later release of the video.

Mickelson then tries to explain to Romney that he’s trying to help him out, that voters who “reject your Mormonism on a theological basis can, would put up with that and might vote for you if they thought you were a morally consistent Mormon,” and failing that, “they’re not likely to hold their nose.”

Given all of that, the Romney from the latter part of this tape should be given tons of credit for not smacking Mickelson in the mouth on his way out the door. That whole extra five minutes was completely voluntary on Romney’s part, the interview was over, yet he stayed to straighten the guy out, and aside from the inherent contradictions, did a fine job of it. Credit the 2007 version of the Mitt Romney campaign, as well, for posting the video on their own website at the time, after initially being pissed about it. That was a courageous move, because it wasn’t a 100% win for Romney, but it was honest, and it showed who he really was. This year’s Romney wouldn’t be posting that sort of thing on his own site.

Maybe the biggest takeaway from this is that Mitt Romney should always assume he is being videotaped, because he probably is.