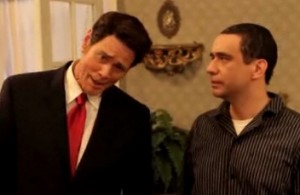 Comedy website Funny Or Die has produced a star-studded sketch comedy routine that features the cast of actors who previously portrayed US Presidents on Saturday Night Live. Jim Carrey’s turn as Ronald Reagan and Dana Carvey‘s George Herbert Walker Bush recall a kinder, gentler, and perhaps even funnier era of SNL political mockery. The message behind the video? To help promote finance regulatory reform, and perhaps to remind viewers that much of the financial mess in which Obama finds himself, has been inherited from previous presidents.

The star studded cast includes current “Not Ready for Prime Time” players Fred Armisen and Maya Rudolph as Barack and Michelle Obama; as well as past players Will Ferrell as George W. Bush, Darrell Hammond as Bill Clinton, Dan Aykroyd as Jimmy Carter, and Chevy Chase as Gerald Ford (in addition to Carrey and Carvey as Reagan and Bush respectively.)

Hollywood isn’t generally known for precisely timed or well-defined campaigns aimed at specific legislative language as bills move through Congress. But the clip, directed by Ron Howard and written by Adam McKay and Al Jean, was produced in coordination with Americans for Financial Reform, a major pro-reform coalition based in Washington, and it hits just as Senate negotiators work toward a compromise on the CFPA in the Banking Committee.

The most recent compromise proposal being discussed by Committee Chairman Chris Dodd (D-Conn.) and two Republicans — Sens. Richard Shelby of Alabama and Bob Corker of Tennessee — would house the consumer protection agency inside the Federal Reserve and limit its authority.

Senate liberals reacted coolly to the proposal. Sen. Jack Reed (D-R.I.) went so far as to say he’d introduce his own version as an amendment on the Senate floor if Dodd doesn’t come through with a strong, independent agency.

This is the second notable reunion video on Funny or Die directed by Ron Howard with political impact. You may recall pro-Obama video in which he reprised his roles as Opie Taylor and Ron Cunningham in an effort to help Obama become president.

Funny or Die’s Presidential Reunion from Will Ferrell