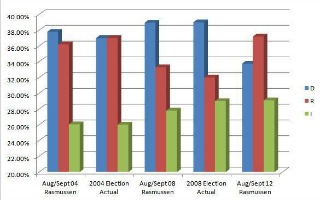 Two pollsters, Gallup and Rasmussen Reports, are projecting Republican voters to have a slight advantage on November 6 over Democratic voters. When they add likely voters leaning towards one party or another, they find an electorate that is marginally more Republican than in 2004, when voters narrowly reelected incumbent President George W. Bush. Gallup projects that the demographics of the electorate will nearly mirror 2008, but party support favors Republicans more than the last two presidential election cycles.

In 2008, Gallup projected that self-identified Democrats would outnumber Republicans by 39 to 35 percent. When voters who leaned Democratic were included, they projected an 12 point advantage for Democrats. This slightly overestimated the final national electorate, in which Democrats enjoyed wide but slightly smaller advantage over Republicans. In 2004, Gallup found party identification favoring Republicans by 2 points, which virtually mirrored the final national vote in which Bush won by just over 2 percent.

This year, Gallup finds a one point Republican advantage over Democrats, at 36 to 35 percent. They also find that self-identified independent voters will make up 29 percent of the electorate. However, when leaners are included, Republican voters will outnumber Democratic voters by 49 to 46 percent.

This finding is close to what Rasmussen Reports saw in their August/September average of party identification. Their surveys found Republicans dominating the electorate with Democrats trailing their 2004 and 2008 turnout totals. Independent voters, which most national polls show favoring Mitt Romney by wide margins but backed President Barack Obama in 2008, approximately mirror their 2008 turnout totals (the Washington Post/ABC News tracking poll on Thursday showed Romney with a 19-point advantage over Obama among independent voters). 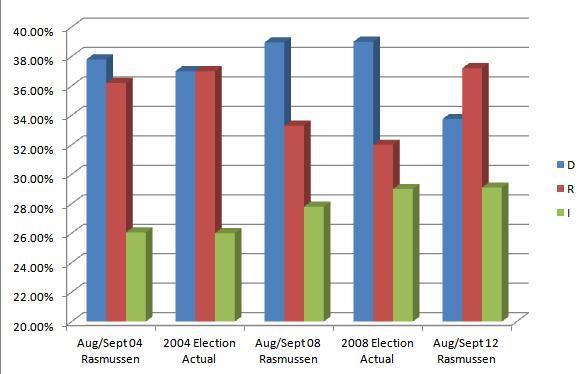 Rasmussen’s August/September averages in 2004 and 2008 were relatively close to the actual electorate. In 2004, Rasmussen predicted slightly fewer Republicans would turnout than actually showed up and, in 2008, they slightly overestimated GOP turnout, but the electorate they projected would show up was close enough to the final total that their 2012 projection merits consideration.

Given the closeness of these pollsters’ findings to the actual electorates in 2004 and 2008, they should be taken seriously. If their projections hold up on Election Day, it is not just probable but likely that Mitt Romney will win the national popular vote. Given the persistent closeness of the race in the battleground states, an Electoral College/popular vote split is no longer an outside possibility.