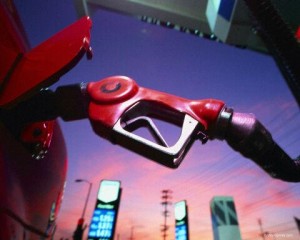 On Friday, we reported that gas prices had tumbled from an early-April peak of $3.93 per gallon to a $3.80 per gallon national average. Since then, the national average has fallen another few cents, but the media who happily bantered about the political consequences of rising gas prices on President Obama‘s reelection prospects have, thus far, remained silent about this drop, which coincides exactly with the President’s remarks about reining in oil speculators.

The national media, especially Fox News, were quick to report that the sky was falling when Republicans tried to make rising gasoline prices a political liability for President Obama. The conversation dominated political news for weeks, as the national average gasoline price peaked at about $3.93 per gallon. Since President Obama“waved the tar baby” of oil speculation on April 17, though, gas prices have fallen from a national average of about $3.92 on April 16, to less than $3.78 per gallon today, and are expected to plunge below $3.50 by July. (It’s worth noting that even the Obama-era peak of $3.96 per gallon is still lower than the $4.12 per gallon national average under George W. Bush in the summer of 2008.)

Of course, correlation doesn’t equal causation, and some are even trying to spin lower gas prices as a negative for President Obama (hello, Murdoch-owned Wall Street Journal), but if rising gas prices are the President’s fault (at least when his name is Barack Obama), then falling prices at the pump ought to be a positive. While most people agree that there isn’t much a president can do to affect gas prices, the current drop isn’t being chalked up to supply and demand, but to the psychology of the oil futures market:

“Fundamentally the psychology changed in April because we got less concerned about supply disruptions,” (director of data, pricing and information services at Oil Price Information Service Ben) Brockwell said.

Right now, the oil market is well supplied. Saudi Arabia has pledged to boost production, if necessary, as it did last year when Libyan oil was off the market.

According to Brockwell, the drop in gas prices is also due to several behaviors that don’t include more drilling:

“People have adjusted” to higher gas prices, he said. They’re driving less, have more fuel-efficient vehicles, and use gasoline with more ethanol. Auto sales are robust, and car dealers say buyers are trading in their old clunkers for vehicles that get much better mileage.

All in all, that’s made U.S. gasoline supply “plentiful,” in Brockwell’s words, as fuel stocks at the key storage hub of Cushing, Okla., exceed their five-year average.

In fact, said Brockwell, the U.S. has become a net exporter of gasoline, with over half of that going to Mexico.

Yes, but what about those gun racks?

There’s all kinds of resistance to giving the President credit here, but the fact that they dropped off the shelf right after his oil speculation speech (which followed a clever March bluff at the Strategic Petroleum Reserve) sure is compelling.

If gas prices do continue to fall into the summer, that could help the rst of the economy, giving consumers more money to spend, and increasing demand, and therefore, job creation. Even if the President doesn’t get the credit for falling gas prices, an improved economy definitely benefits him.